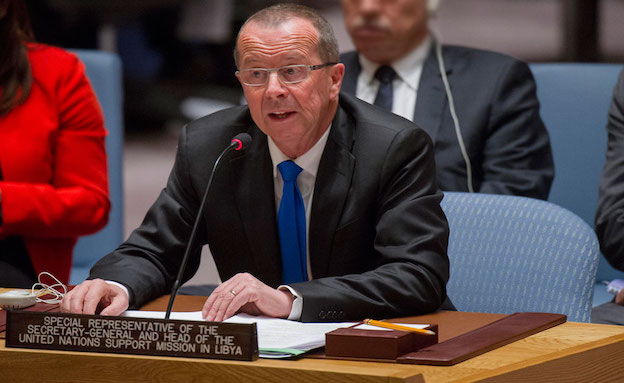 Martin Kobler, the UN’s special envoy to Libya, has called on the “presidential guard” to provide security to the various bodies of government, including the UN-backed Government of National Accord (GNA).

“I give my full backing to the creation of the presidential guard which will provide protection to state institutions and embassies,” said Kobler to the UN Security Council on Tuesday. “The presidential council and the GNA must not be protected by armed groups,” he added.

The UN mission to Libya has scheduled a “high level meeting” on December 13 where discussions regarding the proposal of the “presidential guard” will take place, according to the UN envoy.

The presidential guard would potentially be exempt from the arms embargo imposed on Libya. Kobler emphasized that the arms embargo on Libya must be enforced “until Libya has a reliable and coherent security apparatus.”

Kobler also made a recommendation for the UN mission to return to the Libyan capital. He also made economic recommendations to help alleviate the pressure on Libya’s economy.

Now that the battle in Sirte has reached its end, “the economic recovery of Sirte and Benghazi must be a matter of priority,” added Kobler.

Kobler also warned that “the fight against terrorism produced results. However, the gains are not irreversible.”

The liberation of Sirte is credited to the Libyan brigades loyal to the UN-backed GNA, which strengthens the GNA’s political resolve.

However, the Tobruk-based parliament’s lack of support to the GNA is a major obstacle that will need to be addressed if the political tension in Libya is to be resolved.