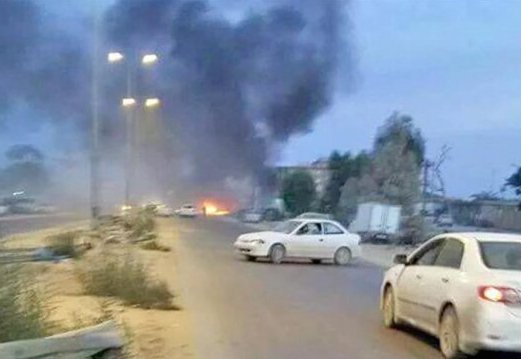 Terrorists launched a “double-tap” car bombing outside the Benghazi headquarters of Saiqa Special Forces this evening.   The first explosion, heard around the city and described as “massive” was close by the entrance to the barracks.  Rescuers were still at the scene when some 40 minutes later a second explosion tore into the crowd.

Remarkably the two blasts appear to have killed nobody outright but left 18 people injured, some of them seriously, including troops, policemen, civilians and medical personnel. It is understood that the first bomb wounded three soldiers and a civilian.

An army source said reports there had been a third car bomb were wrong. There is as yet no indication if the two vehicles had suicide bombers at the wheel or were detonated remotely.  It seems possible that the second bomb may have been driven up in the confusion that followed the first blast. Had the second vehicle been close to the initial detonation, its explosives could have been set off at the same time.

Saiqa special forces have been playing a leading role in the Libyan National Army’s reduction of the terrorist enclave of Ganfouda. It was Saiqa who retook and then bulldozed the iconic Gwarsha Gate three weeks ago, which had for more than two years been a symbol of the presence of Ansar Al-Sharia terrorists in the city.

This evening Saiqa commander Wanis Bukhamada said that as a result of the bombings, his troops would redouble their efforts to overrun the Ganfouda district.

The LNA assault seems to have slowed after the initial advances last week and renewed predictions that the Benghazi Revolutionaries’ Shoura Council and its Ansar and IS terrorist allies were finally about to be beaten.

It appears that, as Bunyan Marsous forces found in Sirte, when the terrorists are pushed into an ever smaller area, the battle becomes a house-by-house fight. Blasting buildings apart at close range does not make for a swift advance. Indeed, as in Sirte, the ruins create fresh terrorist positions, while actually hampering the progress of infantry.

Footage appeared today of LNA soldiers firing a Mine Clearing Line Charge (MicLic)  into Ganfouda. The MicLic is a rocket that trails a tail of high explosives which is dropped in a long line onto locations where mines or IED’s are suspected. Shortly after the line has hit the ground the device explodes. The footage today focused on the launch of the MicLic from behind a wall in an urban street and the cheers of the soldiers after the rocket had soared off with it long tail. There was no visual of the subsequent blast, nor did there appear to be the sound of a major detonation.