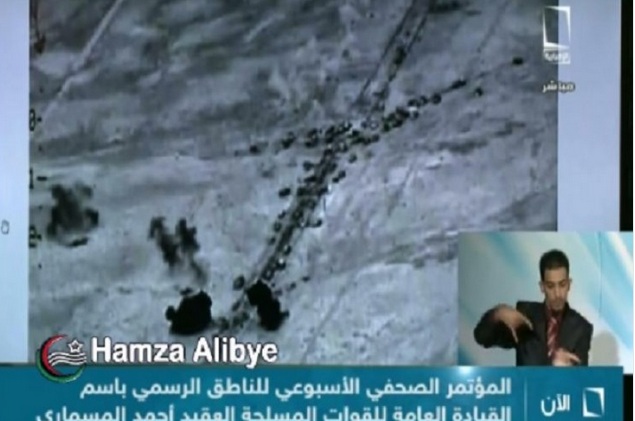 The spokesman for Dignity Operation, Ahmed Al-Mismari, has plagiarized an aerial footage showing Iraqi air force destroying an ISIS convoy in Al-Fallujah to claim that their warplanes have bombed the attackers of the oil crescent region away.

During his weekly briefing, Al-Mismari, aired live on TV still photos, which are originally taken from a footage released by the Iraqi Defense Ministry last June, alleging that they show an airstrike by their air force on the coalition forces that attacked the oil crescent region Wednesday morning.

“Our air force has conducted several airstrikes and these are the photos of our airstrikes in the early morning, we destroyed their convoy completely,” he alleged.

Dignity Operation continues to utilize lies and twisted facts to mislead the public and convince Libyans of their so-called war on terror.