Home / Featured Articles / Russia in Libya, A Driver for Escalation? 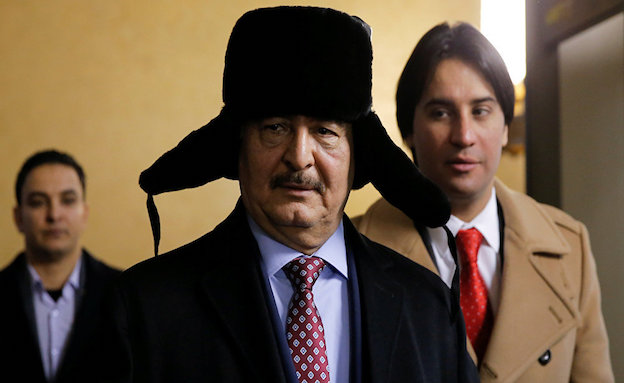 Russia in Libya, A Driver for Escalation?

Since summer 2016 Russia has stealthily joined the fray in Libya, having disengaged in 2011 when its hopes at protecting up to $10 billion in contracts with the Qaddafi regime were frustrated. In early November, a small number of Russian military technicians appeared on the ground in Cyrenaica, reportedly to help re-fit General Khalifa Haftar’s forces, renew weapons systems, and upgrade naval and air defenses.

Several sources mention that Russian military advisors are providing assistance to Haftar either from Cyrenaica or Cairo.1 Along with reports that Abdul Basit al-Badri—Haftar’s middleman and the Libyan ambassador to Saudi Arabia—request small arms and aircraft in September, this lends some credence to claims published in Al-Araby Al-Jadeed that Haftar has garnered 4 billion Libyan dinars ($2.9 billion) in military deals with Russia.

Mikhail Bogdanov, Russia’s deputy Minister of Foreign Affairs and Putin’s Special Representative for the Middle East, has ramped up Russia’s involvement, following Putin’s pattern—seen from Ukraine to Egypt—of engaging with a country by finding a reliable and reliant ally to sponsor. Although every faction in Libya’s internecine conflict hopes to win Russian support, Khalifa Haftar, leader of the self-anointed Libyan National Army, appears to be Moscow’s man in Libya. Already receiving military or financial support from many nations ranging from the UAE to France, he now controls a majority of the eastern province of Cyrenaica and—since September 2016—Libya’s oil facilities. He is aligned with the Tobruk-based House of Representatives (HoR), which remains Libya’s legitimate legislative body. Together they maintain a rival set of institutions, including an Eastern Central Bank, to the UN-backed Government of National Accord (GNA) in Tripoli.

The first example of cooperation came in May, when the governor of the Eastern Central Bank orchestrated the shipment of 4 billion Libyan dinars ($2.9 billion) from Goznac, the official mint of the Kremlin. Hafter and his allies found an obliging partner in Russia to assuage their worsening liquidity crisis and display their competence as governors of Cyrenaica. Russia received reprimands from Western nations, which acquiesced when they realized that they could not stop the shipment—sending a message to Russia that, at present, pursuing unilateralism in Libya has no consequences. Over June and July the relationship was strengthened as first Haftar and then Agila Saleh, the speaker of the house for the HoR, traveled to Moscow for the first time to meet with high-level officials. Haftar aimed to secure an arms deal with the Kremlin for more advanced ground and air weapon systems than are currently available to him from Egypt and the UAE. At the time, Russian ambassador to Libya Ivan Molotov was adamant that no weapons could be delivered without the UN Security Council first lifting the arms embargo on Libya. However, Russia’s position has been softening as Haftar’s camp maintained ties to the Kremlin through Abdul Basit al-Badri, Libya’s ambassador to Saudi Arabia. In late September, Badri went to Moscow with a request from Haftar to “start an anti-Islamist military operation in Libya that is similar to the one in Syria,” and Bogdanov told journalists that he would “carefully consider” any request by Libyan authorities for “Russian participation in operations against terrorists.” In late November, Haftar again went to Moscow to push Russia to help lift the UN arms embargo on Libya.

Russia’s growing interest in Libya is part of a wider strategy to regain geopolitical prominence in the region. Beginning in Syria, where they threw their full weight behind ally Bashar al-Assad, they have since been filling the void left by a retreating United States, or at least the widespread impression of it. Russia saw this as a successful model of backing a strongman in return for increased influence, military bases, and high-value contracts—now exporting this model to other countries that hold the potential for strategic gains, such as Egypt. President Abdel Fattah el-Sisi, despite having a firm grip over Egypt, is in desperate need of support for his own war on Islamism and to prop up an ailing economy. Increased bilateral ties and joint military exercises suggest Russia is happy to give them the help they need and which the United States once provided. Although not officially confirmed, there are strong indications that an agreement has been made for Russia to refit its Soviet-era naval base at Sidi Barrani in western Egypt and build an additional airbase there by 2019. Russian support for Haftar in Libya is a continuation of this strategy of backing a military leader who, with the right narrative of combating Islamism and terrorism, both requires their help and is well-positioned to facilitate Russia’s own regional goals. If Egypt is any indication, a successful alliance with Libya augurs not only lucrative construction and military contracts—including allowing Russian naval vessels to use Benghazi’s port, as Muammar al-Qaddafi had agreed to in 2008, and potentially to use an airbase near Benghazi—but much more importantly a consolidated and expanded Russian presence in the central Mediterranean, giving its military closer access to Europe and to U.S. bases in Sicily.

Moreover, propping up Haftar would not create much of a stir in Washington in light of President-elect Donald Trump’s preference for authoritarian anti-Islamist regimes. The Trump administration already includes officials, such as new National Security Advisor Michael Flynn, who align with Russia’s Middle Eastern policies and want to refocus U.S. action to narrow counterterrorism efforts and away from stabilization efforts like the UN-led Libyan political process. Unlike Hillary Clinton, Trump has no interest in rolling back Russia’s influence in the region and very little appetite for supporting a unity government in Tripoli.

This unopposed expansionism has dire concerns for the escalation of the Libyan conflict. Despite pleas from Haftar’s envoy, Putin is unlikely to replicate in Libya the vast-scale direct involvement he has conducted in Syria over the last year and a half. But under the guise of counterterrorism, Russia is quietly escalating its backing for trusted proxies like Haftar and the Egyptian military, which has sent equipment and weapons to support Haftar’s forces. If Russia pressures the United Nations to repeal the arms embargo and weaken resolutions enforcing the independence of Libya’s oil and financial institutions, Haftar will be able to further expand his war against loosely defined terrorists. Heavy Russian support for Haftar could kill the political process by removing his need to negotiate with the GNA, which would be counterproductive to Russia’s stated aims of countering terrorism. Haftar is likely incapable of stabilizing all of Libya, despite his ambitions, and any advance westward would bring him in conflict with myriad armed groups who see him as an existential threat. This would lead either to escalation or more anarchy, neither of which is conducive to containing jihadism.

So far, while stepping up its political and military involvement, Russia has kept some degree of ambiguity on its plans, maintaining nominal support for the peace process while boosting one of the country’s warlords. Russia has approved all UN resolutions in favor of Libya’s political process and remains, at least nominally, a supporter of the Libyan Political Agreement. As recently as Haftar’s visit to Moscow in late November, it maintains that it keeps ties with all Libyan parties. The UN-sponsored political process is deeply flawed, but nevertheless is part of a wider framework that has considerably contributed to de-escalating Libya’s conflict. The UN could lead this process in a more positive direction by pushing some politicians, who previously backed the Tobruk government and risk being sidelined should Haftar become too powerful, to join the coalition supporting the unity government. Concurrently, Europeans could continue efforts to bring economic unity to Libya, as outlined in the London and Rome summits. If Russia is truly interested in stability, it will have little opposition to such UN and European efforts—and could be involved in them.

Russia might yet decide to keep its support for UN-backed political process at a purely nominal level while intensifying its political and military support for general Haftar in the name of the fight against terrorism. But ultimately, no counterterrorism strategy can be successful without a stabilization strategy. Without a functioning political process and a recognized government sitting in Tripoli, Russia could be left bearing the burden of Libya’s chaos while risking ties with Italy and France, who could play a big role in removing EU sanctions on Russia. Putin could soon be left wondering whether Libya, a country traditionally much less important to Moscow than Syria, is worth this gamble.