Home / Normal / One Year After Skhirat 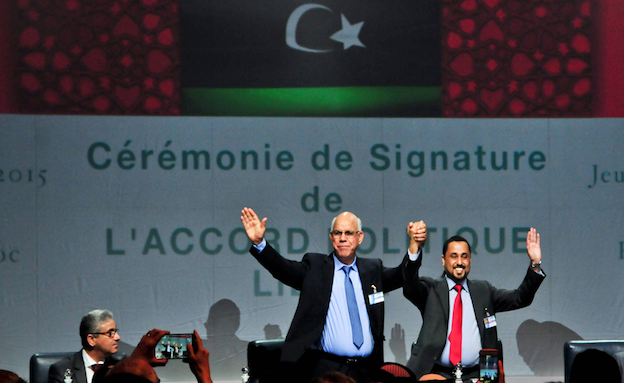 Today is the first anniversary of the signing of the Libya Political Agreement (LPA) in Skhirat, Morocco. I well recall the euphoria, expectation and excitement of the moment. There was a sense that the divisions and polarisation that had plagued Libya since the revolution were over. Now was the time to rebuild, restore and recover Libya’s dignity.

Unfortunately, that hasn’t happened. Progress has been slow. Deadlines have been missed such as the withdrawal of the militias from all cities and residential areas within 30 days of a ceasefire; and the endorsement of the Government of National Accord by the House of Representatives within 10 days.

I share the frustration that I frequently hear during my visits to Libya. The problems that ordinary people confront on a daily basis are immense: shortage of cash, electricity and water cuts, growing criminality and kidnaps. After 42 years of dictatorship and 5 years of chaos and civil war, the Libyan people deserve better.

What can be done? There is some good news: the defeat of Daesh in Sirte; progress against extremists in Benghazi; the increase of oil production from the oil crescent; and local reconciliation agreements reuniting families with their loved ones.

Nonetheless, it is undeniable that the country is facing enormous challenges: economic meltdown, terrorist violence and political separation.

Some people will no doubt claim today that the Skhirat Agreement has failed. Some will even claim that it has expired after one year. This is not correct. According to the LPA, it is the GNA that has a shelf life of one year from the vote of confidence; that particular clock hasn’t even started ticking yet.

The United Nations Security Council has recognised this point. The 15 countries issued a joint press statement on 7 December reaffirming their full support for the LPA and calling on all parties to accelerate its implementation.

They expressed their deep concern over the serious political polarisation and the recent escalation of violence between armed groups. They urged all Libyan stakeholders to work together with the Presidency Council to resolve outstanding issues and focus all Libyan efforts on rebuilding the country.

The Security Council explicitly focussed on the needs of the population, reiterating their determination to support the implementation of the Agreement to alleviate the suffering of the Libyan people.

Is there any alternative? I believe not. Of course another group of Libyans could start a negotiation, but it is highly unlikely that they would quickly reach a different agreement that would secure all-round acceptance and rapid delivery.

Far better to concentrate on the LPA. As far as we are concerned, it is not set in stone. There is room to revise it, if Libyans agreed to go down that route.

It is worth remembering that this Agreement is only an interim, short-term step. The long-term future of Libya requires a new constitution. This step depends on the Constitutional Drafting Assembly, an elected body representing all parts of the country.

Pending a final draft of the new constitution, Libya needs a government to unify the country. National unity is the most powerful weapon to confront the challenges the country is facing. The details of the LPA are important, but not crucial. There is no such thing as an agreement that can garner the support of everyone. So don’t make the perfect the enemy of the good.

Libyans I have met in Tripoli, Misrata and Tobruk want peace, stability and prosperity. That’s what we want too. On this anniversary, I hope all Libyans will redouble their efforts to achieve that goal.