Home / Normal / What is behind Haftar’s visit to Algeria? 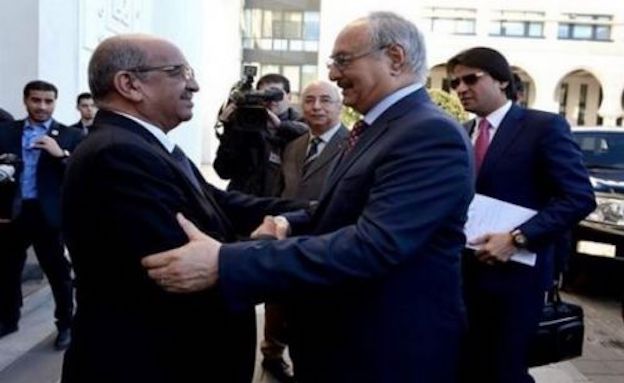 What is behind Haftar’s visit to Algeria?

The Algerian Minister of Maghreb, African Union and Arab League affairs, Abdel Qader Messahel, said that the commander of the army of the House of Representatives (HoR), Khalifa Haftar, should make concessions to reach understandings with the Libyan factions.

That followed discussions between Messahel and Haftar in the later’s visit to Algeria, attempting to accomplish the goal he so far failed to achieve, which is a military defeat.

According to media sources, Messahel expressed Algeria’s refusal to any foreign intervention in Libya and confirmed the need for Haftar to make concessions to spare the country being turned into Syria.

Messahel said that “we informed Haftar our refusal to the military trajectory to solve the Libyan crisis, and conveyed our concerns from the current foreign interferences.”

Haftar is trying to gain more time to accomplish military defeat on the ground until the new US administration is formed in the addition the Russians and Egyptians support for Haftar and assured him that they would take care of  his political project that is based on amendments demanded by the head of the (HoR), Aqeela Saleh and the military under the slogan of fighting terrorism.

It is unknown whether Haftar’s visit to Algeria, his first official one, is upon invitation from Algeria or upon a request from Haftar. Discussions tackled the “developments of political and security situation in Libya and meant to restore security and stability as soon as possible.”

Messahel grabbed the opportunity to review “the efforts carried out by Algeria to encourage Libyan factions to reach consensus agreement to settle the conflict. He also “renewed Algeria supporting position to the political solutions in the framework of the political deal signed on Dec. 17th, 2015 following the inclusive dialogue between Libyans, and national reconciliation to keep the country’s unity, integrity, and sovereignty”.

Haftar’s “awkward” visit to Algeria comes weeks after a similar visit by the head of the HoR. The visit goals are not yet declared, especially that Algeria insists on the political solutions refusing any military solution that Haftar himself prefers.

Last month, Saleh visited Algeria, discussed the situation in Libya and proposed the possibility for Algeria to help regarding the Security Council resolution banning weapons flow to Libya. But that was refused by Algeria.

From his side, the HoR member, Abdul-Salam Nusseya, said that the “visit aimed at finding an exit to the Libyan crisis, with the escalated political crisis and stalemate.” He added, in media statements, that “Algeria is expected to play a role in the Libyan situation, for being an influential country in North Africa. The Libyan issue is a political, military, and social, and such factors can’t be separated.”

The head of Al-Bayan for political studies, Nezar Krekesh, said that “the secret behind the Haftar visit is the Algerian refusal to any international forces near its borders, or any foreign intervention in Libya, fearing that Tamazight would demand independence and from the spread of extremist groups in the area.”

The Libyan journalist Mohamed Ashur said that “Haftar –Algeria relationship is very critical for many reasons, like Algeria’s influence in the Maghreb region, understanding about Haftar so-called the war in the western part, besides the existence of many Gaddafi figures in Algeria.”

From his side, the doctor in Al-Bunyan Al-Marsous medical brigade, Mohamed Al-Taweel, said that “Algeria is always objective, unlike Egypt that supported Haftar at the expense of the revolution. Haftar is aiming at presenting himself as Libya’s new ruler, promise Algeria a piece of the Libyan cake in case of offered help so he can enter Tripoli.”

Human Rights Solidarity chairman, Juma Omami, said that “Algeria rule is vogue. Haftar’s movement towards Algeria is the security factor, given the large common borders. The visit came within the international framework supporting the political dialogue”.

Omami added that “at the same time, serious developments in the south, the delivery of Tamanhant air base to forces affiliated to Haftar could lead to a sure of agreement between Haftar and Algeria.”

The Government of National Accord (GNA) close activist, Mervit Swehly, said that “Ageela Saleh and Khalifa Haftar refuse the reconciliation and the peaceful coexistence with Libyans. They don’t mind to leave Libyans by every possible means to control the country, as Bashar Al-Assad is doing in Syria.” The power greed of Haftar makes him looking everywhere for a supporter, east, west, or south, but major Western powers are committed to the political accord”. She added that “Haftar will not succeed in attracting other countries than Egypt and the UAE.”