Home / Normal / Air raid on Ganfudah, Benghazi kills a husband and a wife 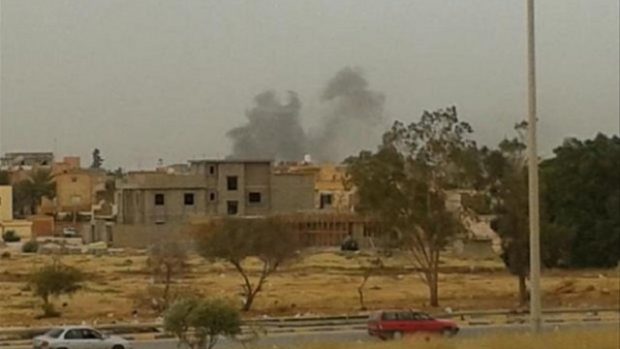 Air raid on Ganfudah, Benghazi kills a husband and a wife

Media sources reported Wednesday that an airstrike was conducted by Khalifa Haftar’s Operation Dignity warplanes on Ganfudah, Benghazi, killing a man and his wife after targeting their house.

This new air attack comes as part of the ferocious war that has been waged by Haftar’s forces and foreign supporters on Ganfudah in Benghazi for months amidst a tight siege laid on the district disallowing any basic needs to reach the civilians.

Libyan and international organisations have time and time again called the atrocities in Ganfudah a misery similar to the bigger one in Aleppo as the militias of the eastern commander Khalifa Haftar said they won’t allow any civilians to leave the city and they will kill any man above 14 years old, according to a footage for Beleed Al-Sheikhi, a tribesman in eastern Libya.

Meanwhile, two of Haftar’s forces senior leaders were killed in clashes on Tuesday with the Benghazi Shura Council fighters in Benghazi, according to sources loyal to Haftar’s Operation Dignity.