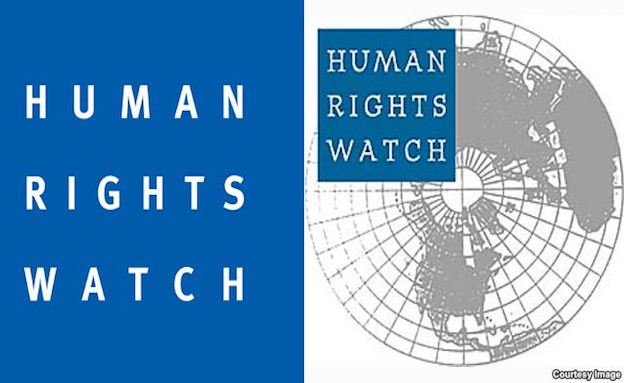 Human Rights Watch (HRW) said, on Saturday, that the Libyan authorities should guarantee the safety and should immediately provide medical care for the 120+ women and children who fled from the fighting in the city of Sirte, in the Misrata prison, where they are being held.

They added that the Libyan authorities should work in close collaboration with the United Nations (UN) and humanitarian agencies to find safe havens for those women and children detained, they should also be treated for injuries, illness, and malnourishment.

The HRW reports that an administrator from Al-Jawiyyah prison told them by telephone that most of the group detained in prison are women and children who believed to be related to Daesh fighters who had been in Sirte before their downfall in December 2016. It is found that Daesh militants abducted some of the women held. The HRW also said that a Libyan official told them by phone that the Daesh fighters had used them as sex slaves.

The prison administrator who called HRW told them that the prison does not have the equipment nor adequate medical care to take care of them. Public hospitals have refused to admit members of the group because of fears of ignited anger amongst the locals; Misrata lost more than 700 fighters in the battle against Daesh, so emotions are high.

The senior children’s rights researcher at the HRW said that “the Libyan authorities should do everything possible to ensure that the women and children who fled Sirte do not suffer from any association they may have with Daesh fighters.” He added that “the authorities should urgently work with the UN and aid groups to get these civilians to a safe place where they can receive necessary medical care and other assistances.”

The prison administrator told the HRW that initially, once the anti-Daesh forces took control of Sirte, they sent the women and children who fled to a former school building approximately 20KM south of Misrata. The Misrata forces then used the school as a transit point and interrogation center, and then transferred them to Al-Jawiyyah Prison in Misrata.

Currently, the prison holds at least 120 women and children, some being as young as a few months old, the prison administrator assured the HRW that there were no suspected male Daesh fighters in prison. The prison holds 123 civilians from Sirte, including 35 women and 88 children, of which 15 are unaccompanied children. These figures were sent to the HRW by the UN officials in Libya who had visited the prison four times since November.

The prison administrator told the HRW that none of the women or children obtains any form of identification documents. In fact, some of the youngest were born during Daesh’s control in Sirte, and their births were not registered. The other Libyan official said that although most detainees are Libyans others come from Iraq, Chad, Syria, Tunisia Eritrea, and Niger.

The administrator also told the HRW that all the women and children fleeing Sirte were, in fact, wives and children of Daesh fighters, except four medical staff of Filipino nationality who were stranded in Sirte when Daesh took control. Some of the “wives” of the fighters were, in fact, victims of human trafficking and were sexually abused by Daesh.