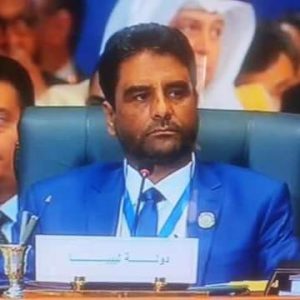 In a detailed analysis, former General National Congress (GNC) member and current House of Representatives (HoR) member for Zintan, Abdualslam Nasia, has declared the ‘‘Temporary Financial Arrangements’’ or budget, released by the Faiez Serraj Presidency Council and Government of National Accord (GNA) as illegal and unconstitutional on a number of legal and financial grounds under current operating Libyan law.

Nasia was giving a technical and legal justification for the HoR’s Finance Committee’s announcement on 20 December rejecting the GNA’s ‘‘budget’’ as unconstitutional and therefore illegal. The HoR Committee had accused the GNA, the executive, of usurping the HoR’s legislative powers.

The GNA, in agreement with the Central Bank of Libya (CBL) and the Audit Bureau, had on 29 December announced its ‘‘Temporary Financial Arrangements’’ for 2017 ‘‘as per the Libyan Political Agreement’’.

The unusual phrasing of ‘‘Temporary Financial Arrangements’’ was deliberately used by the GNA, CBL and Audit Bureau to avoid using the incendiary term ‘‘budget’’ as only the Libyan legislature can pass a budget. The deliberate use of this term implicitly recognizes that a ‘‘budget’’ has to be drafted and passed under Libya’s specific budget law and processes.

The statements released by both the CBL and GNA said that a number of agreements had been reached following their meetings in London, Rome and Tunis together with the National Oil Corporation (NOC), the Audit Bureau and foreign entities supportive of the Libyan Political Agreement (LPA).

These five-point agreements had, the statement said, found ‘‘effective processes’’ to improve the standards of living for Libyans and to solve a number of financial, fiscal and economic bottlenecks.

However, in his detailed critique of why the GNA ‘’budget’’ is illegal and unconstitutional, HoR member Nasia says that firstly, ‘‘The term ‘financial arrangements’ is not mentioned in all Libyan financial legislation including the state finance law, the budget regulation and warehousing regulation’’.

‘‘It is only mentioned in paragraph (6) of article (9) concerned specifically with the Cabinet functions of Libyan Political Agreement where the paragraph refers to putting in place and implementing ‘temporary emergency financial arrangements’’.

Secondly, Nasia explained that ‘‘Article 27 of the (2011) Transitional Constitutional Declaration (Libya’s current operational but temporary constitution and social contract) stipulates that the budget is passed through a law (by the legislative body which is currently the HoR).

Thirdly, Libya’s ‘‘State financial law has organized the process of budget preparation in its article (5), which stipulates that the draft budget is submitted to the legislative body for its examination and approval’’.

Fourthly, ‘‘Article 8 of the State finance law provides that if the budget is not adopted in time, open temporary monthly credits from the previous year are opened. That is what is referred to as ‘one-in-twelve’ (1/12)’’, Nasia explains.

Fifthly, ‘‘Article 13 of the Libyan state finance law provides that in the case of necessity, an extraordinary draft budget or additional appropriations are permissible, but that this must follow the same approval rules on the General State budget’’.

From a financial perspective, Nasia questioned why the GNA had made no provisions in its temporary ‘‘budget’’ for the subsidy of foodstuffs despite making allocations for fuel, medicine and electricity subsidies. He wondered why at a time of rising food prices the GNA chose this step.

Equally, he questioned why the GNA did not consider subsidy reform for fuel (as has been long advised by the World Bank and IMF), especially, as he says, as most fuel is currently either being smuggled or fuelling internal militia fighting.

The GNA temporary ‘‘budget’’ did not ‘‘state the exchange rate used in the drafting of the ‘‘budget’’ as well as the volume of oil production and expected oil selling price so that we are able to determine the deficit’’, Nasia added.

‘‘By looking at current oil prices and production rates during the coming year (estimated at a million barrels per day), and with the current (official) exchange rate of LD 1.30 per dollar, the deficit will be about 18 billion dinars’’.

‘‘Therefore’’, Nasia explained, ‘‘this deficit needs to approve a law for the public debt and the repeal of law No 15 of 1985 and the establishment of a Department of Public Debt at the Finance Ministry’’.

‘‘Because, it is not possible to cover this deficit and the deficit of last year by advances from the Central Bank, as was referred to by the GNA’s ‘’budget’’ because law No 1 of 2005 on banks requires that advances are returned before the end of the fiscal year – and that will not happen’’.

‘‘Paragraph (5) of the GNA’s ‘‘budget’’ statement speaks of continuing contingency allocations but it did not specify its value because it is considered additions to the total received financial arrangements. Equally, its continued disbursement is contrary to the state’s financial law. I am surprised that the Audit Bureau approved it, knowing that monies were transferred in previous years that belonged to development projects under implementation’’.

‘‘In view of the political division and in view of having two or more governments and the difficulty in approving the budget by the HoR, the most appropriate solution to the continuation of payment of salaries and for basic materials and services, is by providing monthly credits from the last approved budget by the legislature’’.

‘‘This is to be on the basis that financial arrangements are to be placed within the budget allocations and to be directed only to salaries and necessary expenses. The general budget should then be presented to the legislative body for formal approval’’, concludes Nasia.

In contrast, HoR member for Rujban, Salah Suhbi, pulled no punches in his criticism of the western-based authorities and the illegal passing of the 2017 ‘’budget’’.

‘‘Tripoli Central Bank of Libya Governor Saddek ‘‘Elkaber, who was sacked by the HOR two years ago and who shouldn’t be at the Central Bank, has committed so many crimes and funded tens of radical terror groups. Of course, the British and the outgoing US administration want him. The British Ambassador has said this many times’’.

ElKaber ‘‘won’t go while his criminal tracks aren’t covered, him and Tarek Yousef, are both supporting an illegal establishment protected by gunmen. It is all just a continuation of Operation Libya Dawn. It is a futile attempt to destroy and rob Libya by destroying its legal and constitutional processes. One day soon, they and any country working with them are going to pay a very big price. We will not forget’’.

‘‘Now they are spending money that can only be released by a specific law each year, to a group that are not recognized by the constitution, to be spent by ministers who have been rejected by Libya’s parliament. Is that how they operate in Germany, UK, USA, or Italy? Or is it only Libya that you can do all of these illegal activities?’’, concluded Suhbi.