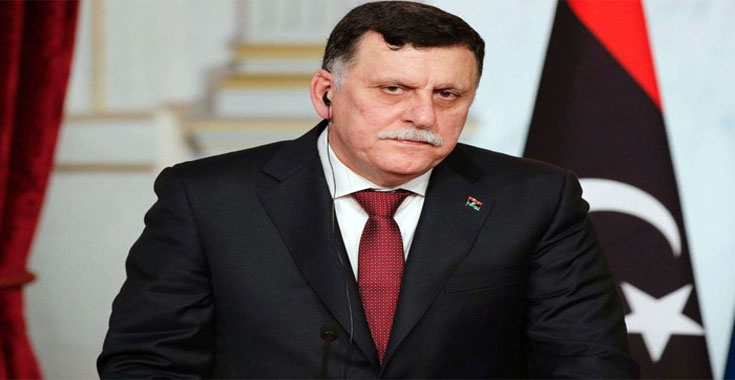 The President of the Presidency Council and Prime Minister-elect of the Government of National Accord Faiez Serraj announced tonight that he was cancelling all decrees passed by his Deputy Majbari over the last few days.

Speaking live on television, Serraj said that he was, with all due respect to those who had been appointed, cancelling the appointment decisions taken while he was away on leave – because they had not been taken jointly by the Presidency Council.

He added that these appointment decisions directly affected the security and stability of the country. He invited the Presidency Council to meet to review these decrees in order to achieve in them the principles of consensus and meritocracy.

Serraj said that there must be no aggression over these sovereign state posts which should be held by patriotic, consensual, capable personalities, and away from party, regional or tribal divisions or, by the use of force or favouritism or appeasement.

He said that decisions taken in a non-consensual manner are not in the national interest but add to the distancing and splitting of Libyans. Serraj said he would not allow the Presidency Council to be the cause of a lack of consensus between Libyans.

He added that nor will he allow it to be the cause of Libyans’ loss of hope for setting the foundations of a legal state of institutions and in executing its main job of paving the way to the transitional stage – which is a constitutional imperative until the country reaches stability.

Serraj said he understood PC Deputy Musa Koni’s anger and disappointment as a result of the struggle on many issues, blaming certain parties to the Libyan Political Agreement (the HoR) of obstruction and for not living up to their responsibilities and others for unilateral actions.

Serraj expressed his regret for the resignation of PC Deputy Musa Koni, revealing that he was in contact with him, hoping that he will reverse his decision. However, he refuted Koni’s claim that the PC had failed in its job.

‘’We did not fail’’, but the challenges are great and the circumstances are very difficult. This requires that we sit down together in order to put the interest of the nation above all else. Adding that abandoning the country in a vacuum and withdrawing now would only lead to more crisis and more conflicts.

Serraj concluded by saying that he is “determined to move forward, taking bold, decisive and resolute moves, and that he was ready to make any decisions that will alleviate the suffering of the people, no matter how painful. He therefore invited his colleagues in the Presidential Council to unite efforts to return hope to the people this new year. We have to walk forward together and no going back, he concluded.

Tonight, the media received alerts that Majbari was to hold a press conference immediately after Serraj had announced the cancellation of the appointments, however, the press conference failed to take place.

It will be recalled that PC deputy head, Musa Koni had dramatically resigned live on TV on Monday stating that the PC had failed to deliver. “I’m resigning because I have failed,” an emotional Koni had said.

It had also been reported that Arif Khojja, the PC’s interior minister, and the planning minister Al-Hadi Al-Juhaimi had also resigned.

It was thought that the series of appointments announced by the PC over the past day were the final straw for Koni who had threatened to resign some months ago. It is believed that he made his decision without telling any of his PC colleagues in advance in order not to allow them to pressurise him to remain.

The controversial appointments had been made by PC deputy president, Fathi Majbari, in his capacity as acting head of the PC while Faiez Serraj was away in London attending a family wedding.

They included new ministers of economy, justice, finance and national reconciliation to replace those sacked because they did not turn up to PC meetings in Tripoli. Also appointed were a chief of staff (Salem Juha), a head of intelligence (Fathallah Hussein Saiti), a counter-terrorism chief (Brigadier Mohamed Mahmoud Al-Zein) and a head of anti-illegal immigration operations (Abdul Qader Al-Tuhami).

The appointment of the Saiti and Tuhami are potentially controversial.  Saiti is the head of HoR’s national security and defence committee, and was previously close to Khalifa Hafter but was not happy when Ali Gatrani was picked as PC deputy, not himself. “He is not up to the job”, said one Libya analyst.

It is alleged that Tuhami, a former member of Qaddafi’s Foreign Security Department, is one of the main suspects in the killing of British policewomen Yvonne Fletcher outside the Libyan embassy in London in 1984.

Koni’s resignation poses a massive challenge not only to the PC but also to the Libyan Political Agreement. It is thought very unlikely that he will change his mind and there is every chance that the PC boycotters Ali Gatrani and Omar Aswad will now follow him.

It will also be very difficult for the dialogue team to appoint replacements. The resignation could set the LPA unraveling. It is to be seen if the reversal of the Majbari appointments by Serraj could persuade Koni to also reverse his resignation decision.

Political TransitionSecurity Situation
All
2017-01-04
asaeid
Previous Essebsi: Preparations for trilateral summit on Libya
Next After Syria, Russia says it was invited by Libya to broker political dialogue