Home / Normal / Al-Ghasri: We have reliable information proving coordination between IS radicals and Haftar 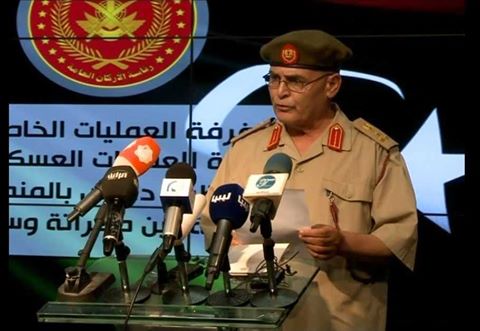 Al-Ghasri: We have reliable information proving coordination between IS radicals and Haftar

We have information that clearly shows a coordination between IS militants and Khalifa Haftar for facilitating the withdrawal of the terrorists from Benghazi to Bani Walid, the spokesman of Al-Bunyan Al-Marsoos, Mohammed Al-Ghasri has revealed.

In a televised statement, Al-Ghasri added that IS radicals did not escape from Benghazi, but rather, they got out with their heads up with hardly ever any tracking or bombing by the Khalifa Haftar-led air force, pointing out that IS militants’ pullout to Bani Walid is a crystal clear war crime that is added to the reservoir of Khalifa Haftar, whom Al-Ghasri described as “defeated coward.”

“The Dignity Operation’s spokesman, Ahmed Al-Mismari has spoken with pride when he said that IS terrorists left Benghazi for Bani Walid and his statements are actually not so manly, as his words echo the fact that he was happy to send criminal forces, who explode themselves to kill Libyans, to Bani Walid city.” Al-Ghasri remarked.

He indicated that a formation of two new forces are in the making – one from Misrata and the second from Bani Walid – and they will be tasked with fighting IS like what happened in Sirte.
“We will never allow IS terrorists to gain a foothold in Bani Walid.” Al-Ghasri stressed.

Bani Walid is 180 km to the south north of Tripoli.

the spokesman of Al-Bunyan Al-Marsoos added that they will kill IS militants before they form a force in the Garza checkpoint, adding that eradicating IS from Sirte took 7 months and after that they were totally terminated without any spills into eastern cities like Ajdabiya or Ras Lanuf, “because they are Libyan towns,” he added.

“Allowing IS militants to pull out from Benghazi is an attempt by Haftar to save his face on the military level as his forces couldn’t bring the battle to an end in a small area like Ganfouda after two years of fighting. Haftar wants to declare an illusionary victory on Benghazi.” Al-Ghasri concluded.