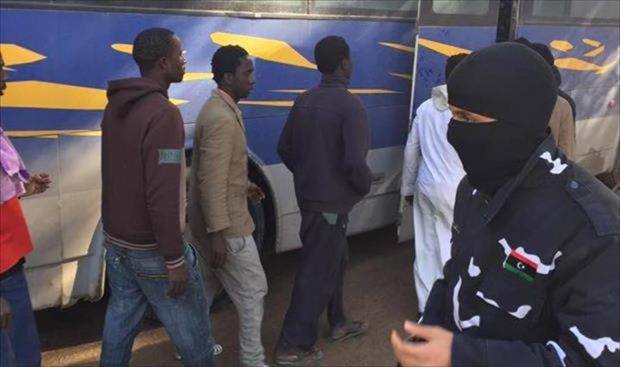 A big number of illegal migrants were transferred to the shelter centers of the Tripoli-based Illegal Immigration Fight Center (IIFC) after being busted in Gargaresh district in the capital, the Special Deterrent Force (SDF) declared on Sunday.

“After storming into the drugs and alcohol dens in Gargaresh, our forces nabbed a number of African illegal migrants.” The SDF said on Facebook, adding that it kept some of the migrants at its headquarters as they are suspected to be part of organized gangs that work in making and selling liquor.

On Friday, the SDF arrested the African migrants after raiding their hubs in Gergaresh, Tripoli. According to the SDF, the raid came after gathering details from the confessions of the persons arrested two weeks ago from the same district.

“Some of the illegal migrants we caught were armed with guns.” The SDF indicated, adding that Friday’s operation continued its mission to terminate what it called the farce and loose security that has shaped Gargaresh for years, leading to the outbreak of drugs dealing, massive African nationals gushing into the area and using certain houses as brothels and liquor factories, according to the SDF.

During the SDF’s raids on alcohol and drugs’ dens in Gargaresh on Saturday, the SDF forces clashed with an armed group related to the National Mobile Force in Ghout Al-Shaal district. Both forces have not reported the reason of the clashes yet.