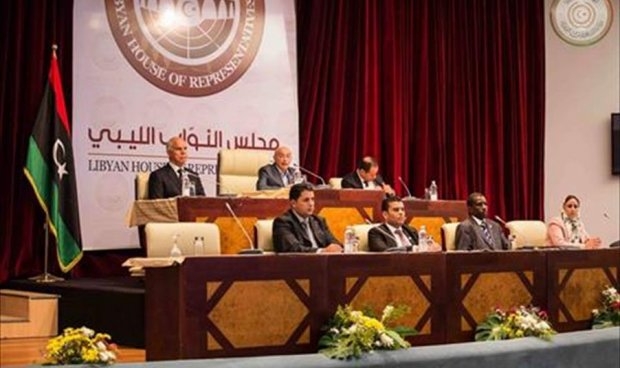 A number of members of the House of Representatives (HoR) from the south of the country have suspended their membership in protest over the on-going blackouts in region as well as the lack of fuel and cooking gas. They claim that while the power shortages in and around Tripoli have been making news, those in the south which have lasted for up to a week in some areas, have been completely ignored.

The HoR member for Wadi Shatti, Al-Hadi Al-Saghir, was one of several who also complained about the lack of power and fuel, not to mention food, medicine and the disruption in services to southern airports. In a statement to the HoR, the group insisted they would continue their holdout unless the situation was resolved and living conditions improved.

A photo posted by eastern-based, pro-HoR office of the Libyan news agency LANA suggests that at least 18 members have joined the boycott.

It is also claimed they want Misrata’s Third Force, which has been involved in clashes with Libyan National Army (LNA) units in the area in recent weeks, to withdraw from the south immediately. The members say that, instead, they want the police and army take control.

They are also reported claiming that the Third Force had deliberately blocked the supply of fuel and cooking gas to the region which is, they say, suffering a “suffocating siege.”

Blackouts have devastated the southern Fezzan region in the past week, with Ghat experiencing a complete lack of electricity for eight days and Sebha six. Frustration has also grown over an apparent lack of concern towards the south in comparison to the uproar voiced over the shortages in Tripoli over the past few days.

Third Force commander Jamal Treiki has, however, denied preventing gas and fuel going to Fezzan and was reported today claiming that supplies of fuel had arrived in Sebha in Saturday and cooking gas was on its way.

Commenting on the problems of the south, the mayor of Brak Al-Shatti, Nassir Saeed Salim, told the Libya Herald that the Third Force could not be held responsible for blackouts; that was down to the actions of criminal groups in Zawia. However, he did hold it responsible for the lack of fuel. Contrary to Treiki’s assertion, the mayor said the force had indeed blocked supplies to the south

The Presidency Council, though, had to face up to its responsibilities in relation to the south, he insisted. The government of the national accord “must be serious” about completing the power station in Obari, he stressed. Once complete, it could solve all the power problems in the south.

The objective was simple and the GNA could achieve it, he said.