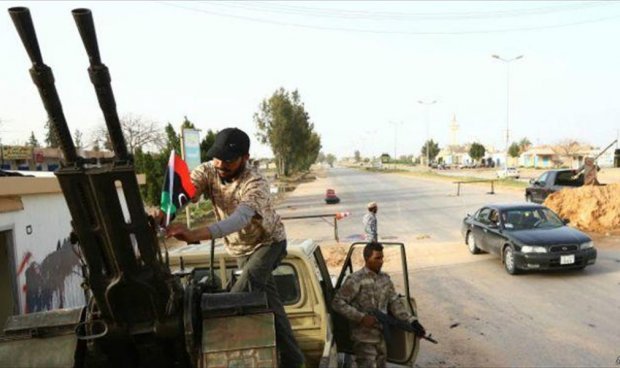 Blockade in west Tripoli continues over arrest of local warlord

Streets in several areas of western Tripoli remained blocked today for the third day running today as a local militia continued to try to force the release of their commander, Adel Sifau. Locally known as “Shita”, he was arrested on Friday by the Rada (”Deterrence”) forces following a series of raids in Gargaresh apparently aimed at cracking down on drug and alcohol dealers, as well as illegal immigration rackets and prostitution in the area.

The largely Amazigh 12th Brigade, which also calls itself the “Hay Andalus Defence Operations Room”, set up sand barriers and checkpoints from Hay Andalus to Ghut Shaal, Serraj and Janzur and are said to be arresting anyone from Suq Al-Juma.

Sifau, said to come from the Jebel Nafusa town of Kabaw, was grabbed by Rada forces on Friday and Rada has accused him of being involved in various criminal activities. In a statement, it said that he had been arrested while trying to protect his illicit businesses in Gargaresh. A source close to Rada has since claimed that under interrogation, Sifau had confessed to several crimes. These, he told the Libyan Herald, had  included kidnapping for ransom.

In its own statement on social media, the 12th Brigade subsequently threatened to retaliate, saying that it would join forces with other militias opposed to Rada. These include those under Misratan militia commander Salah Badi. There are now reports that the 12th brigade is receiving encouragement from Tripoli and Misrata hardliners.

It already has close links to the Janzour-based Mobile Forces.