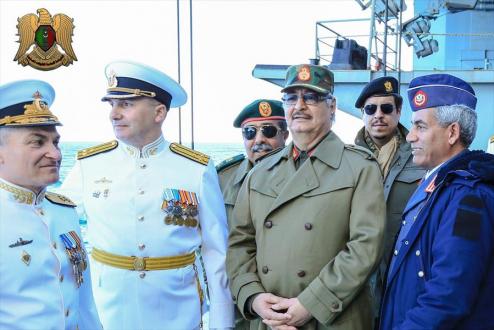 Russia’s secret plan to back Haftar in Libya

Russia has agreed to arm renegade general Khalifa Haftar, one of the key players in the Libyan civil war, according to a source within the Algerian military.

Algeria, a key mediator in the region, has also thrown its weight behind Haftar, the source told Middle East Eye.

“We must face the facts. We are not going to wait forever for Libyan political parties to reach agreements. Libya needs the rule of law to be restored across the whole country and needs a strong army that is capable of ensuring its security up to the borders. And with the Russians we share a vision,” the source said.

Haftar leads the Libyan National Army (LNA) in the east of the country and is a close ally of the Tobruk-based House of Representatives parliament, a rival to the Tripoli-based Government of National Accord (GNA) which has all but lost control of the Libyan capital despite international support.

Backed by Russian armoured vehicles, ammunition, and sophisticated listening and surveillance devices, it is thought that Haftar will now be able to cement himself as a strongman of an increasingly splintered country.

The deal could finally give Moscow the access to North Africa that it has been seeking for years.

“In 2010 the Russians asked Algeria for access to Mers el-Kebir naval base near Oran [west],” an Algerian military source told MEE.

“But back then we said no. Now they can get access through the Libyan coast.”

The source added that the agreement was said to have been reached during Haftar’s visit to the Russian aircraft carrier Admiral Kuznetsov on 11 January.

Russia has also wanted to regain the influence in Libya it enjoyed before the fall of Gaddafi. A lucrative arms contract it signed before the former leader’s overthrow in 2011 was said to be worth four billion dollars, while the military training it provided gave it a staunch ally in the region.

“There will be deeper coordination over the coming months,” said a source who was a colonel under Gaddafi. “Haftar is going to facilitate Russian access to ports in Libya as well as open up airport runways to them.”

A diplomatic source said January’s deal was struck after a series of meetings in Algiers and Moscow.

“That is what Haftar went to ask for in Moscow in November and then in Algiers in December.”

This followed a meeting in September in Moscow between the general’s special envoy, the Libyan ambassador to Saudi Arabia, Abdelbassat al-Badri, and Vladimir Putin’s special envoy for the Middle East and Africa, the deputy minister of foreign affairs, Mikhaïl Bogdanov.

Moscow is unable to sell arms directly to Haftar because the UN arms embargo in force since 2011 has not yet been lifted.

“Haftar could have turned to his allies, Egypt and the United Arab Emirates, but most of their weapons are American. The natural solution, then, was Algeria, which gets 90 percent of its arms from Russia. The idea was that some of them could be passed on to Libya,” the source said.

“It would not really be a sale,” said the diplomat with a smile. “Let’s say it was more a form of support that suited everyone.”

Russia’s support for Haftar suited Algeria’s interests, according to a civilian source close to the negotiations which were held in Algiers between the various Libyan players.

“Even though Algeria does not completely trust him, they know that he is at the moment the only one who can ensure a minimum of stability,” said the source.

In December MEE revealed that Algeria had agreed to provide arms to Haftar as long as they were not used to seize power illegally nor to fight Libyans other than IS militants.

Khalifa Haftar has risen to become a leading player in Libya after a relentless war against Islamist groups alligned with the GNA and a number of shrewd political moves including the the seizure of the Oil Crescent ports.

A former Gaddafi loyalist, he became a leading figure in the civil war against the former leader and today is estimated to control 60,000 fighters.

“He was received like a leader in Algiers and Moscow and agreed with Algerian political and security decision-makers to appoint a personal representative to keep an open line of communication about anti-terrorist issues,” said a source close to the Algerian intelligence services.

“But above all, allowing him aboard the aircraft carrier was a way for the Russians to recognise him as the only commander of the Libyan army.”

According to information gathered by MEE, more than 150 IS militants have already reached the Fezzan region in southwestern Libya, which borders Algeria, Niger and Chad.

Because of the risk of them meeting with other IS-linked and Boko Haram militants in west Africa, Chad closed its borders with Libya on 5 January.

“To an extent Russia would also like to make this area secure,” said the Algerian military source, adding that Algiers feared an influx of up to 3,000 fighters fleeing from diminishing IS-held and opposition areas in Syria and Iraq.

But Algeria is still holding out for a political solution despite their deal with Haftar, according to the Algerian diplomat.

“We still think that common ground must be found by all parties but, at the same time, we have to make it a priority to build the Libyan army.” 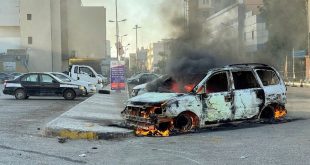