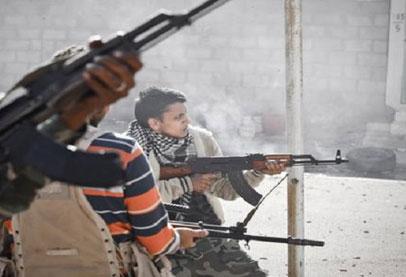 Clashes between Fursan Janzour Brigade (Janzour Knights) and armed groups from Wershefana have renewed in Janzour and Sayyad, western Tripoli.

According to reports, civilians were injured as the armed groups affiliated with the Tribes Army from Wershefana attacked the districts of Janzour and Sayyad by mortars and random shelling.

Other sources said that the Fursan Janzour Brigade suffered the death of two of its fighters in the clashes, however; no official details were given yet about the names and the real number of casualties.

On Thursday, violent clashes erupted at the western entrance of the capital, Tripoli, between armed groups called Fursan Janzour Brigade, which is positioned in Janzour some kilometers west of Tripoli, and armed forces from the Wershefana district to the west of Tripoli.

According to sources from nearby the clashes, the fight broke out over the killing of a Wershefana person who attempted to steal a car of a Janzour person in Sayyad area nearby Janzour in western Tripoli.

After the guy was killed, the Wershefana people totted their arms and got out their tanks and attacked the Fursan Janzour Brigade which is positioned in Sayyad and Bridge 17, the entrance to Janzour and then Tripoli.