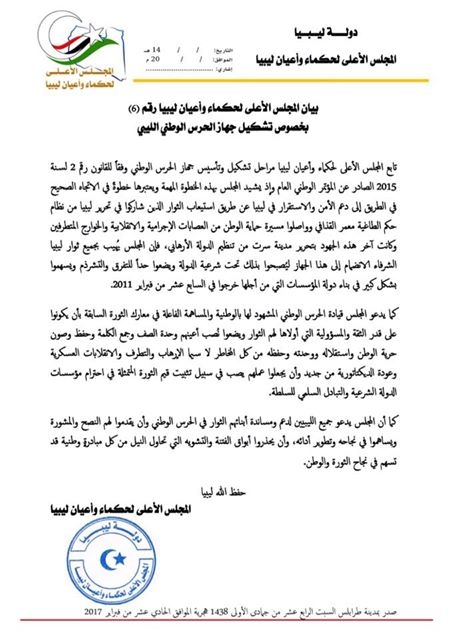 The High Council of Libyan Notables and Elders has expressed support for Libyan National Guard (LNG), which was recently formed, calling on Libya’s revolutionaries to join the LNG to be under the legitimacy of one state and end the political fragmentation.

On Facebook, the council confirmed that the formation of the LNG is a step on the right path that will lead to Libya’s stability through containing the revolutionaries who partook in freeing Libya from the dictator Muamar Gaddafi and then pursued their devotion by fighting criminals, coup plotters and terrorists.

“The leadership of the LNG must be trustworthy of the responsibility given to them by the revolutionaries. They should be working on uniting themselves and preserving the country’s unity and sovereignty.” The council added.

It added that the LNG should establish the constants of the revolution especially the peaceful circulation of power and respect for legitimacy, exerting much effort to secure Libya from terrorism, return of dictatorship and coups.

“We warn of the sedition and division mouthpieces who are endeavoring to derail any national initiatives.” The council added, saying all Libyans should support the LNG by forwarding advice and consultations.”

Brigadier General, Mahmoud Al-Zigal, announced the establishment of the Libyan National Guard (LNG) on last Thursday as per the General National Congress’s decree (No.2 of 2015).

In a press conference in Tripoli, Chief of LNG, Brig. Mahmoud Al-Zigal said the LNG is not linked to any political party and would operate away from regional, tribal and political disputes, with the task of securing Libya’s land borders and helping the country stabilize.