Home / Featured Articles / Islamists and the political scene in Libya 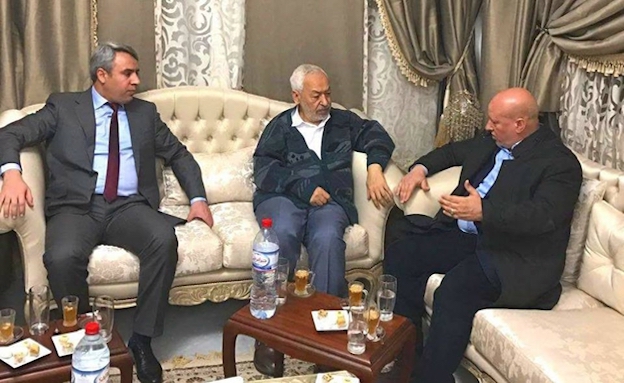 Islamists and the political scene in Libya

Given Trump’s repeated statement confirming his hostility towards the Islamic political movements, and vows to “eliminate extremist Islam from earth” and that America has no other choice but to fight terrorism. The United Nations envoy to Libya, Martin Kobler, highlighted the important role of Islamists in the Libyan political talks to solve the crises engulfed the country following the toppling of Muammar Gaddafi.

Libya Al-Mostakbal website, translated here by LIBYAPROSPECT, said that in a controversial statement, Kobler said that “Muslim Brotherhood has a political party, they are part of the political dialogue, they represent one power in the country.” He referred that UN has constant communications with all political factions except terror groups (Daesh, Qaida, and Ansar Sharia). He said, in a statement that “the whole Muslim Brotherhood matter is exaggerated,” denying any European special support for them, confirming the EU support to all Libyan factions to stop the illegal migration and human trafficking.

Kobler said that the UN mission encourages all sides to sort out the current troubles and reach the level of forming the government as soon as possible and then writing the constitution. He added that all political parties, but not the terrorist groups, must participate in the political and electoral operation

Commenting on such statements and how far Islamists can join and solve the political crisis, the Tunisian analyst, Monzer Thabet, said that Kobler’s statements “come in line with the Tunisian initiative seeking to avoid near civil war, especially after the failure of the Presidential Council (PC) of the Government of National Accord (GNA) that headed by Fayez Al-Sarraj to mobilize popular support.”

He also told Libyan Al-Mostakbal that “Kobler’s statements collide with Cairo approach helping the commander of the army of the House of Representatives (HoR), General Khalifa Haftar, known for his opposition towards the Islamists, besides the plans of Trump seeking to re-engineer the US policies, which is unattainable given continued influence of the Muslim Brotherhood reproducing extremism and threatening peace in the long run.”

With the efforts by neighbor countries to find consensual solutions that involve all political currents including Islamists, Thabet said that “the possibilities of success are limited, given Egypt and Algeria Precaution of terror groups existence in Libya.” Besides positions of the EU states, especially Italy, supported by Trump, that fears infiltration of radical Islamism to its lands.

Concerning Algeria hosting talks with Islamist figures, he said that “the Algeria plan towards Muslim Brotherhood is to contain and employ to reduce risks. Algeria is controlled by the obsession of preventing foreign intervention in the region, but it is engaged towards absorbing the political Islam in an objective manner towards the parties of the crisis, for sensitive internal considerations, but it remains opposed to certain Islamist powers.”

The head of the Justice and Building Party, Mohamed Sawane confirmed previously ,in media statements, following talks with the head of the Tunisian Nahda movement, Rashed Al-Ghannouchi, importance of Shkirat agreement as a cornerstone of any political process, with limited modifications to achieve the biggest consensus among Libyan parties without interferences from other parties, stressing the need to preserve the democratic political process without exclusion, beside the unification of the military institution under civil power.

He also said that “some members quit the party, given its position towards certain issues, but it is a healthy move.” He stressed that the party is “independent institution, away from any current including Muslim Brotherhood as an advocacy group, that’s why many differences emerged between the party and the group.”

Sawane’s statements come in time when observers to the Libyan matter said that the political Islam wants neither state of law or institutions, adding that they need to revise their options and compromise for the sake of the country. Observers also confirm that Libyans are not against political Islamists currents, but they want political Islam that seeks the greater interest of the nation, based on modern civil state.