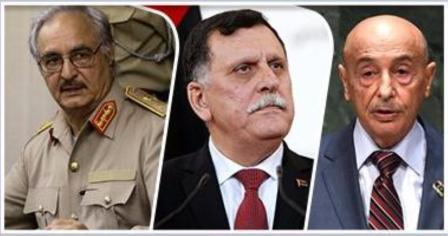 Attempts by Libya’s rival governments to reach a peace settlement in Egypt have failed. The leader of the Presidency Council, Fayez Al-Sarraj, flew back to Tripoli after Field Marshal Khalifa Haftar refused to meet him. However, the two men did agree on fresh parliamentary elections and a presidential contest in February 2018, according to Egyptian Army spokesman Mohamed Samir.

According to a source speaking to the Libya Herald, Sarraj did agree to one proposal that would see him remain in office for another year but Haftar refused to accept the condition. The president of the House of Representatives (HoR), Ageela Saleh, was non-committal, simply stating that he would study the idea.

Separate meetings were held in Cairo, with Sarraj and Haftar supposed to get together at a meeting chaired by Egyptian President Abdel Fattah Al-Sisi. However, Sarraj waited at his hotel all day and Saleh did likewise at another while Egyptian officials at the intelligence headquarters tried unsuccessfully to pressurise Haftar to compromise on the proposals.

Haftar is reported to have rejected Sarraj’s plan for a three-man presidency, a separate government, the position of commander-in-chief to be held jointly by the heads of the Presidency Council, the HoR and the State Council and a supreme military council which would include the field marshal.

The only positive result apart from the agreed parliamentary elections in 2018 was the agreement on a committee to be comprised of 15 members each from the HoR and the State Council which would look at changing the Libyan Political Agreement.

Among the set of outlines agreed upon by all the rival parties was the country’s sovereignty, the preservation of Libya’s unity, and plans to establish a stable structure following years of conflict.