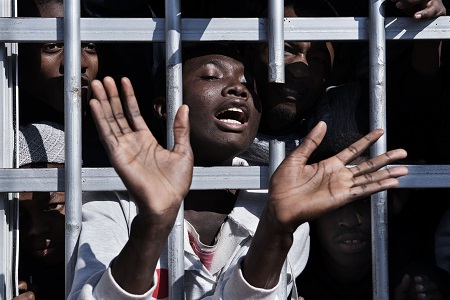 A migrant gestures from behind the bars of a cell at a detention centre in Libya, Tuesday 31 January 2017. The detention centre was constructed in 2006 following an agreement between the Italian and Libyan governments in an attempt to stem the flow of migrants reaching Italy. When UNICEF visited the centre on 31 January 2017, the population consisted of 27 women (four of whom were pregnant), one 11-month old child, a four year old, as well as 1,352 men - of which 250 were under the age of 16. The centre is at the crossroads of areas controlled by different militias fighting with each other. For this reason it is a very dangerous centre, for officers who work there and for migrants in detention. The detention centre is currently managed by the Libyan National Army, and most migrants remain there for a period of 8 to 10 months according to the manager Abdalhamad Altunisa. "Children are often alone, they cross 2000 kilometres of desert without their families, and they are rescued at sea without documents, said Altunisia this makes it difficult for us to know their real nationality and age. Before 2014 we brought them back to the border between Nigeria and Libya to take them back to their countries, but after the last civil war it was much more difficult. Those areas are dangerous even for us. Migrants who were being held in the cells said they are rarely allowed out. Many of the those being held are sick, and some detainees are said to have passed away because they have no access to medical care. The director of the centre, Altunisa, said "the official government [of Sarraj] does not give us the money to pay salaries and to pay those who bring us food. So often we do not have enough food or drinking water. This winter was particularly cold and in recent weeks 15 migrants froze to death." Libya is a country in turmoil. Since 2014 security is precarious, living is hard, and violence is commonplace. The country is riven with militias in conflict with each othe

In the report, titled “A Deadly Journey for Children”, which was released on Tuesday, the UN children’s agency said a total of 25,846 children – most of them unaccompanied – crossed from North Africa to Italy using the Mediterranean route in 2016.

For the report, UNICEF researchers interviewed a total of 122 refugees – 82 women and 40 children – who tried to complete the perilous journey.

Three-quarters of the refugee children interviewed said they had experienced violence, harassment or aggression at the hands of adults at some point over the course of their journey.

Approximately one-third indicated they had been abused in Libya. A large majority of these children did not answer when asked who had abused them. A few children said they had been abused by people who appeared to be in uniform or associated with military and other armed forces, and several others said that strangers had victimised them.

Also, nearly half of the 122 women and children interviewed reported sexual abuse during migration – often multiple times and in multiple locations.

Women and children were often arrested at the Libyan border where they experienced abuse, extortion and gender-based violence. Sexual violence was widespread and systemic at crossings and checkpoints.

Men were often threatened or killed if they intervened to prevent sexual violence, and women were often expected to provide sexual services or cash in exchange for crossing the Libyan border.

UNICEF also identified an estimated 34 migrant detention centres in Libya during their research.

Children did not receive any preferential treatment and were often placed in cells together with adult detainees, which increased the risk of abuse, according to the UNICEF report. Some observers have also reported abandoned refugee children in detention centres and hospitals.

“The Central Mediterranean from North Africa to Europe is among the world’s deadliest and most dangerous migrant routes for children and women,” said Afshan Khan, UNICEF Regional Director and Special Coordinator for the Refugee and Response Crises in Europe.

“The route is mostly controlled by smugglers, traffickers and other people seeking to prey upon desperate children and women who are simply seeking refuge or a better life. We need safe and legal pathways and safeguards to protect migrating children that keep them safe and keep predators at bay.”

Recent data in a survey of women and child refugees in Libya during late 2016 reveal the appalling level of abuse along the migration route.

At the time of the survey, 256,000 migrants were recorded in Libya, including 30,803 women and 23,102 children – a third of whom were unaccompanied. The real figures, however, are believed to be at least three times higher.

‘Still in the shadows’

Most children and women indicated that they had paid smugglers at the beginning of their journey, leaving many in debt under “pay as you go” arrangements and vulnerable to abuse, abduction and trafficking.

Women and children also reported harsh and overcrowded conditions, including lack of nutritious food and adequate shelter, in Libyan detention centres run by both the government and armed militias.

“What came out of this report is quite stark and shocking,” Sarah Crowe, UNICEF spokesperson for refugee and migrant crisis, told Al Jazeera. “Testimonies coming from these children are truly surprising and terrifying.

“We have access to some of the detention centres in Libya, but a great majority of migrant children in that country are still in the shadows.”

There is a necessity to highlight what is already happening to these children and also point to acceptable solutions, Crowe said.

“You can’t look at Libya as a solution on its own,” she said. “Libya, in its current state, can not be the solution to the crisis we are facing. We can not send children back to detention, to this destiny. It is unthinkable.

“We need to work on finding a solution to the root causes of the problem and we need to do more to support children at every step of the way.” 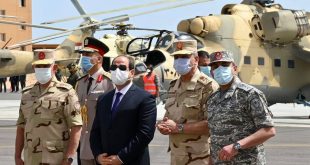