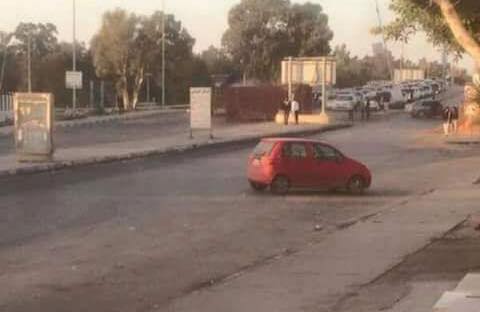 Just four days after vicious fighting was bought to a halt by Presidency Council mediation, Tripoli is once again tense this evening as militias erect sand or container roadblocks and armoured vehicles take up positions.

Members of the new Libyan National Guard and other supporters of Khalifa Ghwell’s resurrected National Salvation Government, such as Salah Al-Burki’s Misratan militia, have mobilised in expectation of an attack by combined Tripoli forces, including Haithem Tajouri’s Tripoli Revolutionaries’ Brigade and the militia run by Abdul Ghani Al-Kikli (a.k.a “Ghneiwa”) both of which nominally support the Presidency Council.

The greatest concentration of barricades is in the Abu Sleem area and at Salah Badi’s militia base at Camp 77, between Bab Al-Azziziya, Qaddafi’s old HQ and the Nasr forest. The roads around the Rixos complex where Ghwell has set up his government are also blocked by shipping containers.

Meanwhile the Nawasi Brigade was calling all afternoon for members to assemble in its Suq Al-Juma heartland. The PC has tasked the brigade to step in and separate any warring parties.

After the recent fighting focused on Abu Sleem, fearful locals were today leaving. “Many families here have locked their houses and fled because militias members who are close to them, have advised them to do so,” Kamal, an Abu Sleem resident, told the Libya Herald.

UNSMIL chief Martin Kobler has messaged his concern at the renewed build-up of forces in the capital. “I call for an immediate calm and implementation of ceasefire agreement reached last week,” he said.

British ambassador Peter Millett, who for the past two days has been in Tripoli where he met State Council chairman Abdulrahman Sewehli, also warned of the renewed threats of violence and said that only dialogue could resolve the confrontation.