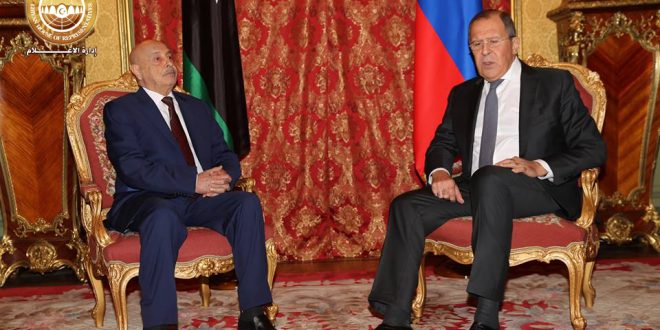 Some $4 billion in military debt to Russia from the Qaddafi era will be paid, the Moscow-based news agency Sputnik says it has been told by House of Representatives President Ageel Saleh.

In an interview with Sputnik, Saleh also said that Russia had promised to provide help in the fight against terrorism, that wounded LNA soldiers were being treated in Russia and that members of Russian parliament’s defense and foreign affairs committees had been invited to visit eastern Libya.

He further disclosed that a delegation from the HoR would shortly visit Moscow, Sputnik said.

As to the payment for arms supplied to the former regime, the news agency quotes Saleh saying that the LNA had asked the Russian government to help train its forces and carry out repairs to military equipment by Russian experts. Libya, he reportedly indicated, wanted to continue the Russian military link because “most of our officers were trained in Russia and many speak Russian, and they know how to use Russian equipment”.

As to the outstanding bills, he said committees to investigate them would be set up, but suggested that the payments would be implemented because of “good will” on both sides.

Moscow, though, has meanwhile denied reports that Russian special forces have been deployed at a Egyptian airbase near Sidi Barrani, some 100 kilometres east of the Libyan border. Egypt has also denied the reports which, if true, would mark the biggest change in Egyptian politics and alliances in 45 years.

“There is no foreign soldier from any foreign country on Egyptian soil,” This is a matter of sovereignty,” Egyptian army spokesman Tamer Al-Rifai has been quoted as saying.

Russian defence ministry spokesman Igor Konashenkov has also denied the allegations. “There are no Russian special forces units in Sidi Barrani,” he said.

The commander of Benina air base at Benghazi, Air Colonel Mohamed Manfour Al-Mnifi, has likewise denied the allegations. He also rebuffed recent reports that Russian security officials were in Benghazi. There were no Russian forces in eastern Libya, he said, and Haftar’s army had not received any assistance from the Russia or from Russian military contractors.

Reuters, though, said that it had been told by Egyptian security sources that a 22-members Russian special force unit was at the base. It also claimed that US officials had corroborated the reports.

Whether or not the Russians have moved security forces into Libya or Egypt, it is clear that the eastern military-political establishment in increasingly looking to Moscow for help. Hafter’s close colleague and adviser, Libyan ambassador to Saudi Arabia Abdelbasset Al-Badri, met Russian Deputy Foreign Minister Mikhail Bogdanov in Moscow yesterday to stress the need to for support in fighting terrorism in Libya and specifically the BDB, which the LNA says are terrorists.