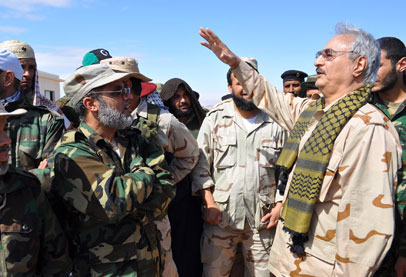 Forces loyal to renegade Libyan general Khalifa Haftar say after heavy fighting they have regained control of the major oil ports of Ras Lanuf and Es Sider in the volatile eastern part of the country, weeks after it was captured by a rival faction.

LNA forces were moving towards the town of Ben Jawad, about 30km west of Es Sider, to confront BDB forces, al-Mismari said.

Al Jazeera’s Mahmoud Abdelwahed, reporting from Tripoli, said Benghazi Defence Brigades’ sources confirmed reports that the ports were lost and its fighters were under attack.

“They finally managed to retake the two terminals, they are still bombarding the Benghazi Defence Brigades along the coast,” said Abdelwahed. “Haftar’s forces have been using advanced missile systems to target their positions.”

BDB’s advance on Es Sider and Ras Lanuf on March 3 set off a fresh round of fighting for control of the ports in Libya’s Oil Crescent, a strip of coast southwest of Benghazi, raising fears of an escalation of violence and a reversal for the OPEC member state’s efforts to revive its oil output.

Libya splintered into rival political and armed groupings after the uprising that toppled Muammar Gaddafi in 2011. It remains deeply divided between factions based in the east and west that back rival governments and parliaments.

Haftar, who is aligned with the eastern parliament and government, has been fighting a two-year military campaign with his LNA forces against armed groups in Benghazi and elsewhere in the east.

BDB is composed partly of fighters who were ousted from Benghazi by the LNA.

Meanwhile, US and security sources on Tuesday told Reuters that Russia has deployed special forces and unmanned drones at Sidi Barrani, about 100km from the Egypt-Libya border, adding any such Russian deployment might be part of an effort to support Haftar.

The reports were later denied by both Moscow and Cairo.

Back in January, Haftar was given a tour of a Russian aircraft carrier in the Mediterranean, according to Russian media reports, a show of Kremlin support for the faction leader who opposes Libya’s UN-backed government.

The latest fighting around the terminals has raised the prospect of a new escalation of violence and put at risk a sharp boost to Libya’s oil production achieved after the LNA took over four ports in September, ending a blockade at three of them.

Though Es Sider and Ras Lanuf have been reopened for exports, they were badly damaged in past fighting and are operating well below capacity.

“Haftar claims to control most of the eastern part of Libya around Benghazi,” Oliver Miles, the former British ambassador to Libya, told Al Jazeera last week.

“But, control is a loose word. He’s been fighting for a long time to deal with them and it has taken a long time time to clear them up. He’s repeatedly said they’ve dealt with the problem but they keep reuniting.”

Libya’s oil production has recently been fluctuating around 700,000 barrels per day (bpd), more than double its output last year but still well under the 1.6 million bpd the OPEC member was producing before a 2011 uprising.