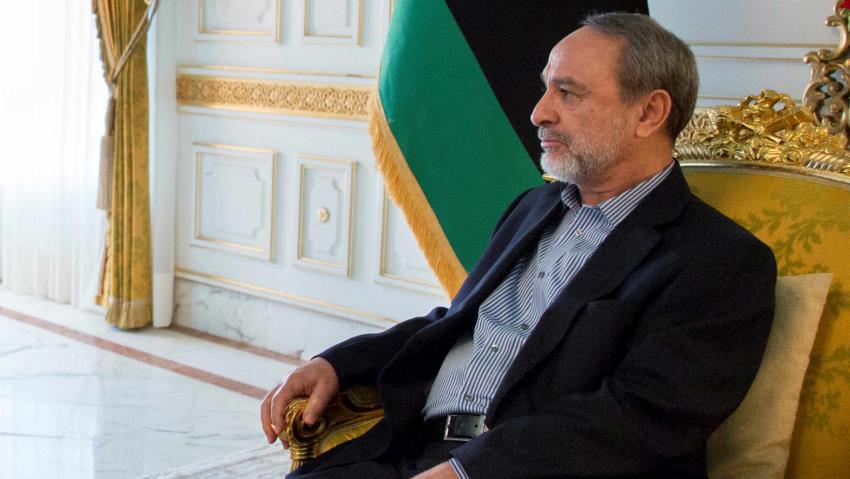 In an interview with The New Arab, the president of the Libyan State Council spoke out against other countries getting involved in Libyan affairs.

“Our problem in Libya is with foreign interference. We pointed out that issue in all our meetings with foreign representatives,” its president, Abdulrahman Sewehli, told The New Arab.

“Today’s problem in Libya is that foreign interference brings very negative consequences. Many countries and regional powers support different parties inside Libya which is then prevented from finding a political solution.”

Sewehli refused to name and shame the countries he blamed.

“I believe everyone knows them. We know them perfectly, as does the international community.”

If these unnamed countries were to freeze their support to groups rivalling the UN-backed Tripoli government, all problems in Libya would be solved in Libya, he argued.

Khalifa Haftar is a former general, allied to Tripoli’s rival power-base in Tobruk, who commands former military forces in the east of the country. In recent months, there has been mounting evidence of a growing relationship between the strongman and Moscow.

But Sewehli doesn’t believe Vladimir Putin intends to support one side over another in Libya.

In a rare insight into some behind-closed-doors diplomacy, Sewehli said the Russian ambassador to Tunis had told him that Moscow wanted a solution in Libya that involved all sides currently jostling for position:

“They didn’t take a position for Haftar, they [want to] work with all parties involved in the Libyan crisis in order to find a real national accord.”

While several media reports point to a strong Italian military presence in Libya, the State Council chief denied it.

“I don’t agree, this is a bit too exaggerated given the fact that there are parties who are trying to spread the idea that there are Italian military forces on Libyan soil.”

Last August, local media reported that a few dozen Italian Special Forces soldiers took part in operations to flush IS fighters out of the Libyan city of Sirte.

That was absolutely not the case, insists Sewehli, saying there was only a military hospital operating in Misrata offering humanitarian assistance.

Furthermore, while the widespread anarchy of Libya in recent years has allowed human traffickers to send thousands of African migrants to Italy, crossing the Mediterranean sea, Sewehli denied reports that local mayors had met with Italian officials.

“The mayors secretly flew to Rome on Monday, where they met Interior Minister Marco Minniti, who asked them to combat human trafficking in exchange for training, equipment and economic aid,” Reuters reported at the time.

Abdulrahman Sewehli said the reports were not true.

“This is the first time I’ve heard of this,” he told The New Arab.

These are sovereign matters of the Libyan state to deal with, and local officials do not have the authority to be making such deals, he said.

Italy’s reported moves towards such agreements aims to fight human trafficking at the local level, analysts have said, as it’s not exactly at the top of Libyan officials’ priorities at the moment.

But rather than having other countries getting involved, the appropriate solution to the Libyan chaos lies in following the Skhirat agreement signed in December 2015 in Morocco, Sewehli maintains.

Libya’s Government of National Accord was formed under the terms of that agreement.

A political solution sought through the mechanisms provided in the Skhirat agreement would confirm that Sewehli’s State Council and the Tobruk-based House of Representatives are the eligible parties to determine Libya’s future.

Early in January, Martin Kobler, the head of the UN mission in Libya, agreed that the political agreement signed in Skhirat was the only framework to solve the Libyan crisis.

Kobler called for the deal’s full implementation and the taking of necessary steps to reach this goal.

At present, there is a desire to unite military institutions and find a common command representative of all parties.

This military command, Sewehli says, must be subordinate to the civilian authorities.

“I think that if we can discuss all of these solutions with the other side and come to an agreement with the House of Representatives, the problems of the political agreement in Libya will be completely resolved.”

Libya’s Tripoli government, recognised by the international community, has been working in the region to get a consensus towards a political agreement, and away from arming individual groups in defiance of international sanctions.

“We try to convince neighbouring countries such as Algeria, Tunisia and Egypt that it’s in their interest to be on the same wavelength,” Sewehli said.

Finding a final agreement in Libya will be in the interest of all these neighbours, he added, as it will bring both peace and stability to them as well as Libya.

International Relations and CooperationPolitical TransitionSecurity Situation
All
2017-03-15
asaeid
Previous EU urges Haftar to get his forces out of Libyan oil terminals
Next Can Russia resolve the conflict in Libya?