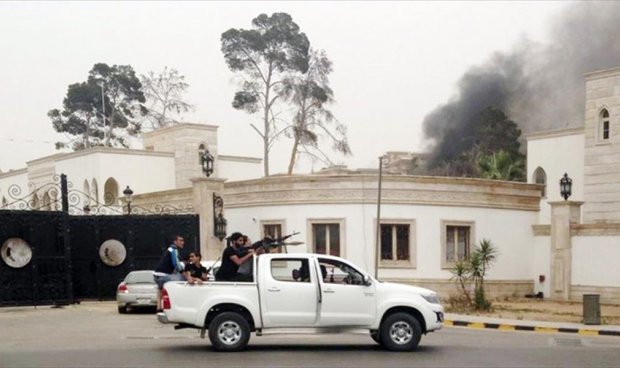 The clashes in Tripoli have continued and grew rougher on Wednesday morning.

According to different sources, the forces and fighters of the rival government “National Salvation Government” (NSG) which are positioned in Qusoor Al-Siyafa (Guest Palaces) in downtown Tripoli clashed in the first hours of Wednesday with the armed groups of Tripoli Revolutionaries Brigade led by Haythem Al-Tajouri and official brigades under the Government of National Support, as well as Ghaniwa-led armed groups from Abu Salim area.

Many pictures and photos have shown the considerable damage the clashes between the two sides have left at the Guest Palaces area and at the hospital nearby, which was hit by gunfire exchanged by the two fighting sides.

The attacking forces manged to kick the NSG forces, who are from Misurata city, out of the Guest Palaces, which they took control of from the High Council of State late last year.

Al-Bunyan Al-Marsous operation, which freed Sirte from IS terrorists, said it won’t stand by and watch Tripoli glide steadily into war, adding that if the clashes continued any longer, it will deploy forces in the capital to end the violent fighting that led so far to a great material damage and horrified the civilians banning them from leading a normal life since Monday night.

Tripoli Municipal Council issued a statement on Wednesday deploring the fighting, and saying that all schools will be closed until the clashes end, asking the capital’s residents to be cautious and avoid being present at the areas of the clashes.

Meanwhile, the Libyan Red Crescent demanded all families, who wish to leave their areas because of clashes, to wait until the volunteers find a safe corridor for them so that they can depart the areas safely without being harmed by any of the clashes’ gunfire.

The neighbourhoods of Gurji, Gergarish, Hay Al-Andalus and Ghout Al-Shaal, have seen violent clashes between armed groups from Misrata and other central region areas and security forces of the Government of National Accord since Monday night.

The clashes, which were triggered by the killing of a resident from Gurji near Aman Bank last week, continued and escalated on Tuesday using medium and light weapons.

No official numbers for the deaths and injuries have been given yet by either side.

Tripoli Security Department said in a statement that it is attempting to kick the armed groups and militias out of the areas of Hay Al-Andalus and Gurji in a cleansing operation of the individuals who are getting in the way of the areas’ security.

The clashes of Tuesday started after the forces of Tripoli Revolutionaries Brigade, led by Haythem Al-Tajouri, and the GNA’s Security Department as well as some of the residents entered the area to drive the militias out of the positions they are located in.