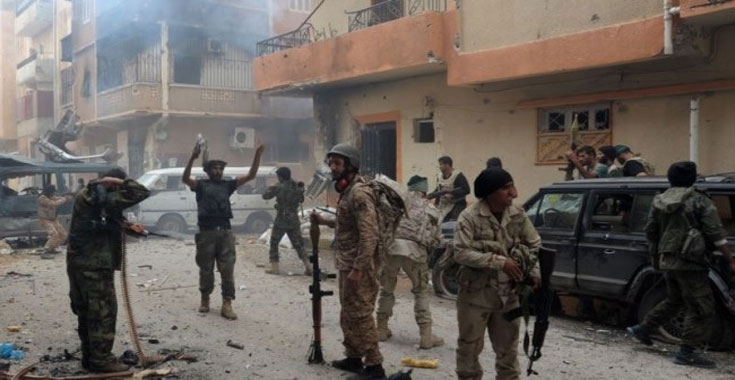 Khalifa Haftar’s east Libyan forces have claimed capture of the final holdout of hardline armed forces in the southwest of Benghazi, ending weeks of resistance by fighters camped in a group of tower blocks.

Milad al-Zwai, spokesman for the eastern-based Libyan National Army (LNA), said on Saturday the siege at the “12 blocks” ended when rival fighters tried to escape at dawn.

Dozens of family members had also been in the besieged buildings and an unknown number were detained by the LNA.

It was not immediately clear whether any of the LNA’s opponents or their families had escaped.

A news agency run close to a parallel government in eastern Libya said LNA forces had “intensified their raids against the last bastions of the jihadist groups in Benghazi, some of whom tried to flee during the night”.

The LNA said it had lost a MiG-21 fighter jet over the Benghazi district of Sabri on Saturday, though the pilot had ejected.

Persistent conflict in Libya since the 2011 ouster of Muammar Gaddafi allowed hardline organisations, including the Islamic State in Iraq and the Levant (ISIL), to gain a foothold in the country.

Benghazi, which fell to hardline groups in 2014, has been the scene of deadly fighting between them and forces loyal to Haftar, who controls much of eastern Libya in defiance of the UN-backed unity government in Tripoli.

The LNA has managed to retake a large part of Benghazi, the birthplace of the 2011 revolution but it says hardline forces are still present in the central districts of Al-Saberi and Suq al-Hut.

Among them is the Revolutionary Shura Council of Benghazi, an alliance of militias that includes al-Qaeda-linked Ansar Al-Sharia.

Haftar has rejected a UN-backed Government of National Accord (GNA) in the capital Tripoli that was meant to reunite the country after it split between eastern and western based governments and military factions in 2014.

On Saturday, representatives of the United Nations, European Union, Arab League and African Union said in the Egyptian capital of Cairo that they supported Tripoli-based government.

The meeting came a day after gunmen opened fire at demonstrators protesting against “militias” in Tripoli.

Arab League chief Ahmed Aboul-Gheit said: “We agreed on supporting the (UN-backed) presidential council in its efforts to exert security control in the capital, including the implementation of the truce agreement.”

Militias have been key power brokers in a country plagued by violence and lawlessness since the NATO-backed ouster of longtime ruler Muammar Gaddafi in 2011.