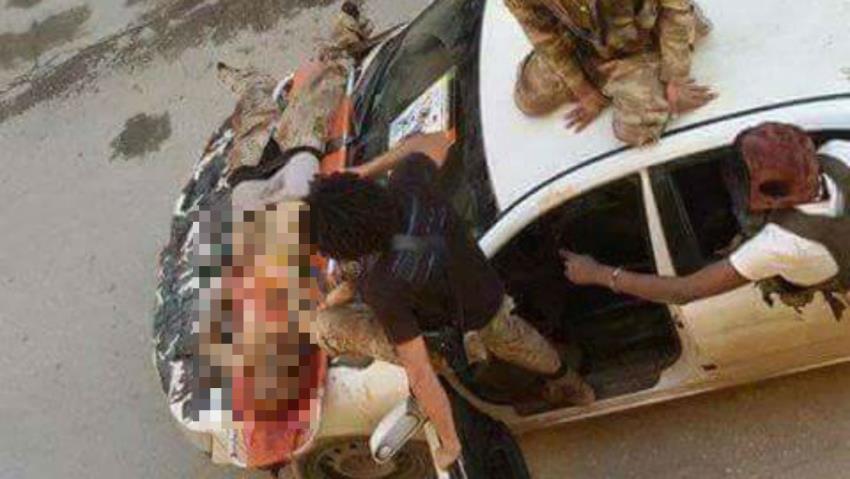 LNA fighters celebrated by exhuming the dead bodies of Islamist fighters, including their senior leader, Jalal Al-Makhzoum, before parading them through town.

The National Commission for Human Rights in Libya (LNHCR) has complained of the LNA’s activities, calling them a war crime.

“This act is far from being a little human. It is a war crime that should be punished,” the LNCHR said in a statement.

The New Arab has seen footage of what appears to be LNA soldiers strapping the dead bodies onto the front of their vehicles and driving them through the town.

The desecration of dead bodies is a war crime under the International Criminal Court’s statute of “committing outrages upon personal dignity”. The Cairo Declaration on Human Rights in Islam also states it “is prohibited to mutilate dead bodies.”

Dozens of civilians were evacuated from the Ganfouda neighbourhood on Saturday, where they had been besieged for days without any food or water.

An LNA spokesperson said that six families had been detained for questioning. Their whereabouts are currently unknown.

The BSC is a jihadist Islamist organisation that claimed in December to have no ties to either al-Qaeda or Islamic State.

General Haftar, the leader of the LNA, met with the British ambassador on Wednesday, two days after his forces recaptured the so-called ‘Oil Crescent’, an important enclave of oil terminals in East Libya.

Millett said the meeting was “satisfying and useful” and part of a “programme of outreach”.

LNA forces captured the Ras Lanuf and Sidra oil export terminals after they were briefly detained by the Benghazi Defence Brigades on March 3.