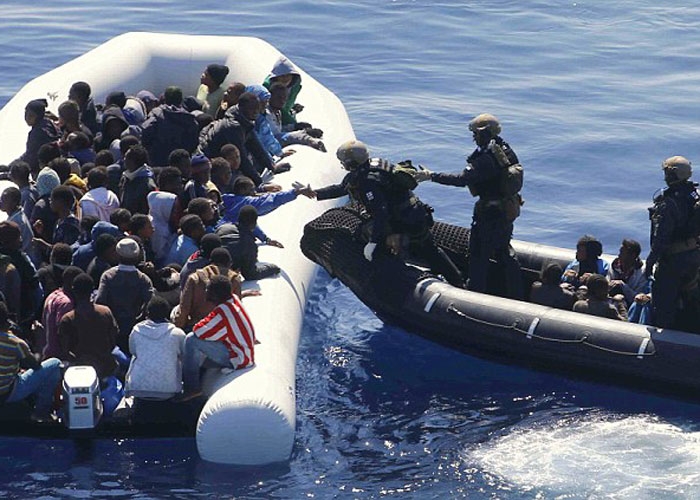 European and North African nations will step up military operations to target human traffickers in a bid to stymie migration flows, according to a deal reached on Monday.

The deal could see European militaries operating along the North African coast, and deep into the Libyan desert.

The European Commissioner for Migration, Home Affairs and Citizenship was also part of the discussions aimed at putting in place a coordinated Euro-Mediterranean strategy.

“Criminal groups organising the illegal flows are the main beneficiaries of this business by exploiting migrants’ search for a better life,” reads the Declaration of Intent, a copy of which has been obtained by The New Arab.

Breaking the business model of people-smugglers will be a top priority, according to the deal.

While Tunisia and Libya signed the final agreement – in return for military financial assistance, according to a diplomatic source, Algeria refused to participate in the summit.

The deal obliquely hints at European military intervention along southern Mediterranean shores, with ministers agreeing to work towards “a stronger operational cooperation with a view to saving lives”.

Monday’s deal also referred to the Malta Declaration, issued earlier this month, which called for “enhanced operational action, within an integrated approach involving Libya and other countries on the route and relevant international partners, engaged Member States, CSDP missions and operations [Common Security and Defence Policy – the EU’s military coordination pact], Europol and the European Border and Coast Guard”.

Such operations are, according to Monday’s deal, set to take place along the Libyan coastline as well as in its desert.

Algeria reportedly rejected some of the agreement’s measures, considering them a violation of sovereignty.

“Algeria refused to sign the agreement as it sees it being imposed by the northern shore… obliging it to yield to third parties an ounce of its sovereign decision-making power,” an Algerian source told The New Arab.

“Algeria’s position on foreign interference and intervention is non-negotiable. There is no way it will let a third party country conduct an operation inside its maritime territory.”

The Eastern and Central Mediterranean routes are seen as the main migratory paths from the global south into Europe. Current efforts have so far aimed to curb movement along the Eastern route, the document underlines.

According to the ministers, the central migratory route represents most challenges at the moment.

“Focus is now needed to jointly work to better manage the situation in the Central Mediterranean,” the document reads.

At least 4,500 migrants died or went missing at sea in 2016 alone, the representatives added, saying “more than 181,000 irregular arrivals on the European shores were recorded in 2016 only from the Mediterranean Central Route”.

This upward migratory trend has been confirmed yet further by anecdotal evidence from this year, though there are still no complete and reliable statistics for the real number of deaths along this route – particularly for those who died along the desert section of the route.

Considering the danger represented by the trafficking industry, “breaking smugglers’ business model must be a priority which needs to be addressed in a joint effort and in a spirit of partnership and solidarity”, agreed the ministers.

“These journeys represent a danger not only for migrants themselves but also for countries of origin, transit and destination.”

The ministers also agreed to increase regular coordination, cooperation and the exchange of expertise and information in the management of mixed migration flows in the Central Mediterranean.

They seek to shape the economic dimension of migration, mobilising resources and countering the smuggling and trafficking of human beings.

It was also agreed to work on improving the living conditions of asylum seekers and refugees, following investigations into overcrowded, unsanitary detention facilities, despite previous reassurances of reform.

Strengthening border protection and increasing cooperation over deportations will also be priorities, despite recent criticism that Europe’s existing border regime allows profit-seeking defence corporations to collude with politicians “to preserve the continent’s wealth and privilege… from the human consequences of the destruction and poverty it has created in the past few centuries around the globe”.