Home / Normal / PC: We will only deal with elected Misrata municipality 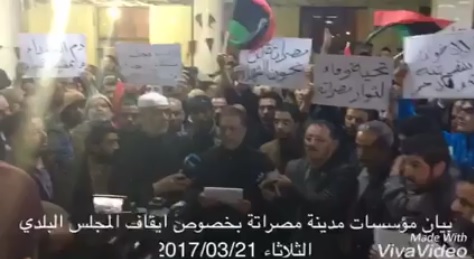 PC: We will only deal with elected Misrata municipality

The Presidential Council (PC) of the Government of National Accord (GNA) said, on Wednesday, that it will only deal with the elected municipality in Misrata, and refused “the attempts to forcefully impose opinions that add confusions to the political and security situation.”

It added that “the election of municipalities consolidates democratic trajectory and shouldn’t be bypassed regardless of any political or security justifications.”

From its side, Misrata Municipality refused what it called “infringement against its legitimacy by the group that doesn’t represent any currents and only seeks to impose their opinion.” It confirmed that they would continue performing their official tasks, adding that “such acts depict Khalifa Haftar’s acts of sucking elected mayors, appointing military governors.”

It is worth mentioning that Misrata Military Council toppled, on Tuesday, the elected municipality, announced the formation of the interim committee to manage the city. It demanded all sectors to continue performing their tasks normally, stop any dealings with the municipality, and preserve the democratic path and peaceful power circulation. The action followed a meeting of military brigades commanders affiliated with the military council, Misrata revolutionaries assembly, and martyrs families unity in the martyrs’ hall.

The head of Misrata Military Council, Ibrahim Bin Rajab, said in a statement, on Tuesday that “the recent tensions inside the city, Misrata military council convened and decided to topple the municipality that refused to join, issued a statement closing all communication means.”

In the same context, Misrata Elders’ Council announced, on Tuesday, its refusal to the recent events unfolded in Misrata. It also said that “we refuse the attack against the state institutions closure, legitimate bodies can be changed only via democratic means. Misrata is a part of the country that seeks the unity.” It also expressed its deep concern and frustration with the events, which “insult and undermine the city, and cause divisions, which only serves Misrata enemies.”