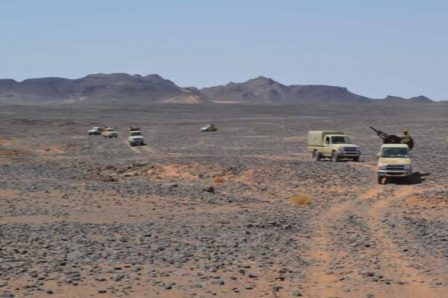 Sabha security department has been handed over the checkpoint of Guwairat Al-Mal by the Third Force that is securing the southern Libyan region in the presence of Sabha security chief, Colonel Yunis Abdelkader, the chief of 32 Brigade’s operations room, Mustafa Al-Shareef and Third Force’s personnel.

Colonel Abdelkader said the handover aims at saving the bloodshed and avoiding any clashes between the Third Force and the forces of 12 Brigade of Khalifa Haftar’s Dignity Operation, confirming that the road between Brak Al-Shatea and Sabha is open and secure.

The commander of the backup 32 Brigade, Abu Bakir Abdullah, added that their personnel took positions across the checkpoint in coordination with the Sabha security department’s personnel in a step aimed at activating the role of the army and police.

Guwairat Al-Mal checkpoint lies on the northern road of Sabha between Sabha and Brak Al-Shatea town that leads all the way to Tripoli.

Third Force personnel have been positioned in the checkpoint since 2014.

Several clashes have taken place at the checkpoint between pro-Haftar 12 Brigade and the Third Force on many occasions.