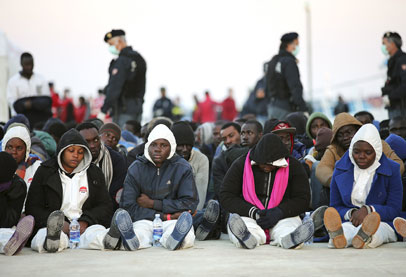 A hundred and sixty nine Gambian migrants returned home on Tuesday, after journeying across the Sahara in harsh conditions only to get stuck in Libya, most in jails far short of their intended destination in Europe, Reuters reported.

The were mostly young men in their 20s, the main demographic of African economic migrants seeking a better life abroad, but also some women and children, Reuters explained.

Looking visibly tired, they stepped off a jet at the airport in Banjul, the palm-fringed seaside capital of the tiny West African nation, then filled out forms they had been given for emergency passports, Reuters indicated.

Most of the dozen or so Gambian migrants interviewed by Reuters had been gone for more than a year. The International Organisation of Migration (IOM) and Gambian government helped release them from detention centers in Tripoli and elsewhere, according to Reuters.

European governments are struggling to find a response to the flow of migrants over the Mediterranean from Libya, and the appalling conditions in detention camps run by traffickers or the Libyan government, Reuters explained.

As Lamin Korita, 26, waited in a black track suit with the hood raised to fill out his papers, he was glad to have ended a 13-month journey that got him arrested in Tripoli. He had wanted to make it to Italy and find work there, Reuters also reported.

“It’s a relief to be home,” he said, though he wasn’t sure what he would do now without skills and in a country with few jobs, according to Reuters, which added that for others, the trauma of their ordeal remained raw.

“Libya was horrible for us. There was no peace. People hit me, they used sticks against me like I was an animal,” said Modou Badjie, 27, a former Gambian soldier who said he was beaten by bandits in Libya and ended up in a crammed migrant camp in Tripoli.

Had either of them made it further, the journey would have become yet more perilous. A rubber boat packed with migrants last month on the way to Italy sank in the Mediterranean. The presumed sole survivor, a 16-year-old Gambian boy, told rescuers he believed all other passengers drowned, Reuters explained.