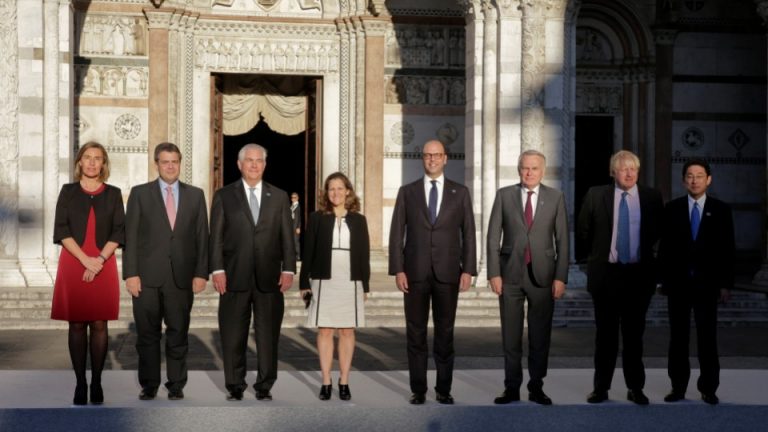 As the dinar continues weak against the dollar, the G-7 countries have warned that the Presidency Council (PC) and the Central Bank of Libya (CBL) need to work together to fix the economic crisis.

While the CBL should be providing the PC with the funds it needed, PC head Faiez Serraj and his government should be bringing the budget under control and ending the liquidity crisis.

Foreign ministers of the  G-7 states, Canada, France, Germany, Italy, Japan, the United Kingdom, the United States of America along with the EU, yesterday wrapped up a two-day meeting in Lucca, Italy at which they mulled all threats to international stability. Libya, along with Iraq and Syrian dominated their discussions.

Interestingly, the G-7 foregn ministers made only a tangential reference to the PC’s attempt to take over key decisions from the National Oil Corporation (NOC) .

“We support the fulfilment of the LPA’s mandate to keep oil infrastructure, production and export under the exclusive control of the National Oil Corporation (NOC) acting under the authority of the Presidency Council (PC).”

The ministers added “All oil revenues generated by the NOC must be transferred to the CBL, which must put the funds at the disposal of the PC”.

The G-7 congratulated Libya on the defeat of the so-called Islamic State in Sirte, Benghazi and “other parts of the country” and endorsed the UNSMIL-led view that as provided for in the LPA, Libya needed united armed forces. It called on armed militias in Tripoli to “exercise restraint”.

The ministers repeated their strong support for the PC, the Government of National Accord (GNA) , Faiez Serraj and UNSMIL. They declared themselves firmly opposed to any attempt to undermine the political process.

“We urge all actors who have a role to play, including those who are still outside the LPA, to engage with a spirit of compromise towards the goal of achieving full political reconciliation, while desisting from actions that would exacerbate internal division and fuel further conflict.