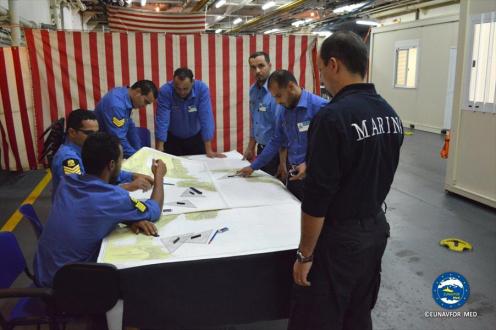 Two commanders from Libya were in Brussels on Tuesday (25 April) to discuss migration with the European Commission as part of a broader effort to stop people from fleeing into Europe.

A senior EU commission official told MEPs on Monday that a “huge meeting” had been organised on their behalf by the EU’s foreign policy branch, the European External Action Service.

Popowski said discussions would revolve around the needs of the commanders and what the EU could offer in return. It would also “make sure that the assistance we offer is used in an appropriate way, so that these funds are well spent.”

Asked for details on the meeting, an EU commission spokesperson told EUobserver that it was about providing the Libyan Coast Guard with support as part of a plan with the EU’s naval operation Sofia.

Sofia’s primary goal is to crack down on migrant smugglers and “disrupt” their business model.

The EU also wants to help dismantle the networks by beefing up Libyan border surveillance with the help of seven member states through the so-called Seahorse Mediterranean Network.

That includes giving the Libyan navy access to the EU nabla data, and possibly, by extension, giving access to the country’s ministries of defence and interior.

Both ministries are plagued with problems.

The EU’s own mission to Libya said in a confidential report leaked to a British NGO that the interior ministry was infiltrated “by militias and religiously motivated stakeholders” and that its defence ministry had “little or no control of the armed forces”.

Despite the issues, the EU still decided to set aside some €90 million in April to help fund migrant projects inside the war-torn country.

Around half of that money will go to somehow improving the lives of people detained in centres, which are often run by armed militia groups.

That also includes detection and analysis of data on mixed migration flows, routes and trends through a so-called Displacement Tracking Mechanism.

But not everyone is convinced of the EU schemes.

The NGO has access to a handful of detention facilities in Tripoli and one in Misrata.

Loof described the conditions as deplorable with some people having to toss their urine onto the walls for it to evaporate given the lack of toilets.

“They are sold, you can sponsor a migrant if you wish, which means you pay a certain sum of money and take somebody home,” she said.

The EU is training the Libyan coast guard to rescue people at sea. They are then sent to a detention centre to languish.

MSF warns that returning more people to already overcrowded detention centres will only aggravate the abuse and exploitation.

The whole is made worse given the lack of any real influence and control over the country by the internationally recognised National Government of Accord (GNA).

One EU official also noted to the MEPs on Monday that Libya’s oil-based economy was on the verge of total collapse given the drop in prices and exports.

“This is going very bad,” he said.