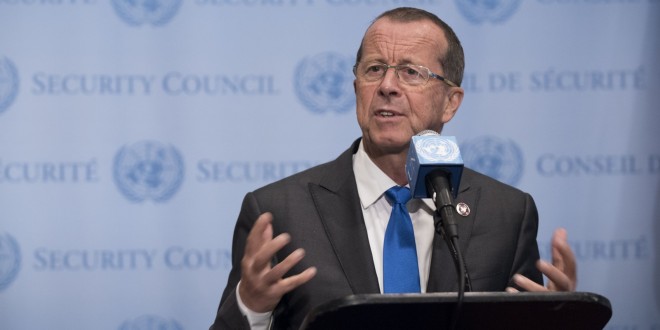 Six years, six envoys: Can the next UN special representative to Libya make any difference?

The UN has been around for more than 70 years since its inception immediately after the Second World War, with the role of resolving conflicts and global peacekeeping.

However, it has not maintained a positive track record over the decades, with some conflicts such as the Palestinian–Israeli one, dating back to nearly the same age as the UN.

It is also clear that it has not succeeded in realising one of its main objectives, which is eliminating “the scourge of war”. After six years of war, with a sixth UN envoy soon to be announced, this has certainly been the case in Libya.

The first official UN representative to Libya was the Dutch diplomat, Adrian Pelt, who was sent in 1949 to oversee country’s transition from colonial rule to independence. Pelt helped Libyans to write a new constitution before the country declared its independence on 24 December 1951, under a monarchy political system led by King Idris Senussi. The UN continued to offer vital help to the new Libyan monarchy in important areas such as education, health and institution building.

Over 42 years under Gaddafi’s rule, the state building established after independence was halted and the nation’s burgeoning institutions were entirely decimated

In 1969, Colonel Muammar Gaddafi came to power through a military coup, abolishing the monarchy and the constitution. Over the next 42 years under Gaddafi’s rule, the state building established after independence was halted and the nation’s burgeoning institutions were entirely decimated.

In 2011, 60 years after the UN’s first involvement in Libya, it was once again in a position to help Libyans build a state on strong foundations to realise their aspirations.

Immediately after the start of the Libyan revolution on 17 February 2011, then-UN Secretary General Ban Ki-Moon appointed the Jordanian diplomat Abdelelah al-Khatib as his special envoy to Libya. Al-Khatib was tasked with mediating between the National Transitional Council (NTC), the political leaders of the revolution, and the Gaddafi regime to achieve a peaceful resolution to the conflict.

The biggest challenge for al-Khatib was to convince Gaddafi to give up absolute power and accept the will of the people through a peaceful political transition. His attempts were not successful as Gaddafi was adamant to suppress the uprising and hold onto power.

On 26 April 2011, just a few weeks after appointing al-Khatib as special representative, Ban then appointed British human rights activist Ian Martin as a special advisor on Libya with a remit to begin post-conflict planning, serving alongside al-Khatib. When the capital, Tripoli, and the Gaddafi regime with it, fell in August 2011, Martin “agreed to start up the UN presence in Libya but made clear he would stay for a limited period, believing that the job required an Arabic speaker”. Several weeks later, Martin arrived in Tripoli and took charge of setting up the UN Support Mission in Libya (UNSMIL) which is still operating to date.

There was a division of roles between Martin and al-Khatib. If the mediation conducted by al-Khatib had developed into a detailed negotiation over a political transition, the roles would have come together. But in February 2012, Khatib resigned while Martin continued on as head of UNSMIL.

The first post-Gaddafi elections held in 2012 had been premature, Mitri argued. How could elections be held in a jungle of arms and in the absence of institutions?

As if taking Martin’s advice, Ban in October 2012 replaced him with Tarek Mitri, an academic from Lebanon with government experience at a ministerial level and, critically, someone with Arabic skills. Mitri continued the work started by Martin, quickly developing a deep and comprehensive understanding of the challenges and dynamics in Libya.

In early 2014, Mitri tried to broker an inclusive power-sharing agreement that would include all the main political forces in the country. It was an important proposal to avert an inevitable armed conflict over power and wealth between the opposing sides, but his idea failed to gain support from some of the key players.

Reliable sources at the time said that liberals and secularists refused to share power with Islamists, as Mitri had proposed, because they felt confident that they would win the June 2014 parliamentary elections outright.

Several months later, reflecting on his tenure in Libya in an interview with the Arabic daily Al-Hayat, Mitri gave a very frank account of some of the mistakes made. The first post-Gaddafi elections held in 2012 had been premature, he argued. How could elections be held in a jungle of arms and in the absence of institutions? Focusing on the election allowed the country’s power struggle to take precedence over state building and it should have been the other way around, he said.

Mitri’s frustrations were clear and his warnings of an inevitable civil war soon materialised, when in the summer of 2014, full blown armed conflicts erupted in both Benghazi in the east and Tripoli in the west. Immediately, UNSMIL had to evacuate from the capital as a result of the security concerns and set up a base in neighbouring Tunisia.

From state building to peace making

The role of UNSMIL had now changed dramatically from helping with the transition to democracy and building new state institutions to a role focused on peace making and conflict resolution. This led to a change, yet again, as Mitri was replaced with the well-established Spanish diplomat, Bernardino Leon.

Leon took over in August 2014 and instantly worked to launch a fresh inclusive political dialogue process. By early September, the new dialogue began in the Libyan city of Ghadames, close to the Libyan-Algerian border. The new process was a roller-coaster, with several parallel tracks being held in various Arab and European countries.

The process culminated with the signing of the Libyan Political Agreement (LPA) in Skhirat, Morocco on 17 December 2015. However, Leon was not there to witness the final outcome of his efforts after resigning two months earlier over allegations that he had been influenced by the Emiratis, including an offer to start a well-paid job in the Emirates after he had finished his role as special envoy to Libya.

The current UN envoy to Libya, Martin Kobler, a German diplomat, was appointed in late October 2015 and started his job a month later. To ensure that the hard work invested by Leon was realised, Kobler’s urgent task was to oversee the implementation of the political agreement on the ground and move Libya from a state of conflict to one of peace.

There are genuine fears that the civil war in Libya could lead to a division of the country and the Libyan Political Agreement (LPA) offered Libyans hope that they could unite once again, behind the new Government of National Accord (GNA).

I joined as a member of the Libyan political dialogue in March 2015 and had direct interactions with both Leon and Kobler. I found Leon to be a shrewd politician who was very skilled at bridging gaps and bringing differing political players closer together, which was crucial for that phase of the dialogue.

Kobler has been highly energetic, injecting a sense of urgency to tackling the many obstacles that have arisen while trying to implement the LPA. And though Kobler brought a sense of optimism and has worked to engage all sides of the conflict, he has not succeeded thus far in actually seeing the implementation of the agreement.

Obstacles to the LPA’s implementation include the reluctance of the parliament in Tobruk (House of Representatives) to raftify the agreement, instead insisting on making changes first; Arab countries encouraging their proxies in Libya to hold out; General Khalifa Haftar’s refusal to sign on unless it guarantees him role in Libya; and, finally, hardline Islamists in Tripoli who are opposed to it.

Libya is now faced with the possibility of having yet another new UN special envoy to Libya for the sixth time in as many years.

In early February, the new UN Secretary-General Antonio Guterres said in a letter to the Security Council that he planned to appoint former Palestinian prime minister, Salam Fayyad, a well-respected Palestinian economist and technocrat, as his special representative for Libya. But under clear pressure from Israel, the new Trump administration quickly vetoed Fayyad’s appointment.

Appointing a new special envoy to Libya, Arab or not, is unlikely to make much difference

Remembering the advice of one of the previous special envoys, Ian Martin, the role could have benefitted from an Arabic speaker and this would at least have given the benefit of saving half the time usually wasted in translation when conducting the long dialogue meetings.

Fayyad, or a similar calibre Arab envoy, will bring the best of both worlds, namely the understanding of local culture and social sensitivities as well as the knowledge of how the international dimensions impact on Libya and its region.

In any case, appointing a new special envoy to Libya, Arab or not, is unlikely to make much difference. UN special envoys are not usually in control of the factors that are essential for success – namely, the inteference of other countries in Libya – and the financial and logistical resources at their disposal are mostly limited.

The challenge of achieving peace and stability in Libya is hampered mainly by the Libyan parties locked in conflict and unwilling to compromise and engage in genuine reconciliation and consensus. It is also hampered by detrimental outside interference and contradictory regional and international strategies and goals.

The UN is only as good as the countries it is made up of, and will only succeed through its envoys and missions when the most powerful and influential players align and have the will to agree and implement common solutions.

Guma El-Gamaty is a Libyan academic and politician who heads the Taghyeer Party in Libya and is a member of the UN-backed Libyan political dialogue process.