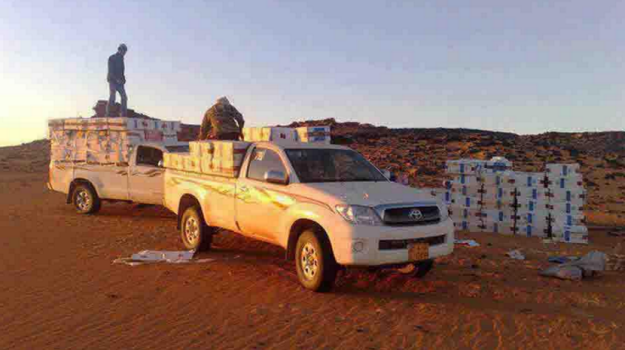 The fuel and gas crisis committee has announced confiscating all of the vehicles that had been prepared to smuggle fuel and foods outside Libya via Ras Ajdair border with Tunisia.

The committee said Tuesday that Ras Ajdair security personnel seized all of the vehicles and foods as well as other goods that were en route to neighboring countries, adding that this crackdown is intended to constrain the ability of the smugglers and to maintain Libya’s resources and fortunes.

The security apparatuses in Ras Ajdair and other border districts in Libya have seized a huge number of vehicles (mostly Tunisian) over the last few days and they have been laden with commodities bought from Libyan markets to be sold in Tunisia.

Relatedly, a naval force patrol from Tobruk naval base intercepted an Egyptian boat off Libyan shores in Bardi district on the borders with Egypt. The boat was filled with 116 sheep to be smuggled to Egypt.

The Egyptian boat was sent then to Tobruk naval base and the sheep were given to the relevant authorities, according to a military source.

The fuel and gas crisis committee has been waging an all-out war on smuggling of fuel and commodities from Libya to neighboring countries, achieving thus far remarkable success in the operations it had tackled.

Border ManagementTrafficking and Migration
All
2017-04-27
Previous First human rights trainings held inside detention centres in Libya since 2014
Next Source: Egypt is not willing to hand over Libyan fugitive Al-Tuhami to ICC