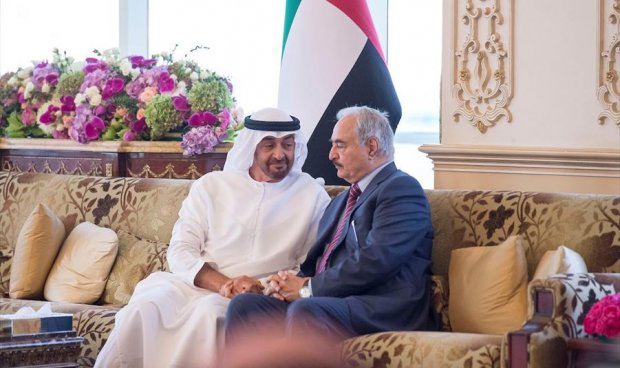 The UAE provided military aid to forces loyal to Libyan military strongman Khalifa Haftar in east Libya, the speaker of Tobruk-based House of Representatives, has said.

In a video clip published by activists through social media on Tuesday, Aqilah Saleh talked about the “brotherly” support given by the UAE to Haftar.

In the video, Saleh said: “We went to the UAE to ask for support. Libyans should mention and should say to their children that the UAE stood with us as a brother would.”

“Literally, Sheikh Muhammad bin Zayed said in the first meeting: ‘What is ours is yours’. He meant to say our wealth is your wealth. They did not spare an effort in supporting us despite the pressure.”

Saleh explained that without the military support from the UAE, Haftar’s forces would have been significantly weaker.

“The army started with 300 vehicles, which we took from a person of our acquaintance because we had no money. The price of each unit was $47,000. These vehicles were part of the initiation of the Karamah (Dignity) operation.”

Middle East Eye has not been able to verify the authenticity of the video clip and is not able to determine its date.

Haftar launched a military campaign dubbed Operation Dignity in May 2014, aimed at rooting out Libya’s many rival militant groups. The campaign was initially dubbed a “coup” by the parliament at the time, but Haftar was later accepted back into the army in November 2014.

Since the campaign was launched there have been numerous reports that it received support from foreign powers, notably Egypt and the UAE, who have been thought to be behind night-time air strikes on sites controlled by Islamist-aligned forces.

Haftar confirmed in January 2015 that his forces had received military assistance from the UAE and Egypt.

In a 20-minute interview with the BBC on 30 January 2015, the former field marshal in the Gaddafi army and long-time exile said that his forces had received enough arms and equipment to allow them to put an end to the armed struggle.

The anti-Islamist, Egypt-backed field marshall controls large parts of the country and has refused to cooperate with the political process, effectively blocking it.

Libya’s oil facilities, which are of fundamental importance to the struggling Libyan economy, had been under the control of forces loyal to the UN-backed Government of National Accord (GNA).

But reports since March have pointed towards the complete takeover by forces commanded by Haftar – who supports a rival government in the far east of Libya that has refused to cede power to the GNA.

The UN-backed GNA has struggled to assert control since it was installed in the capital Tripoli a year ago.