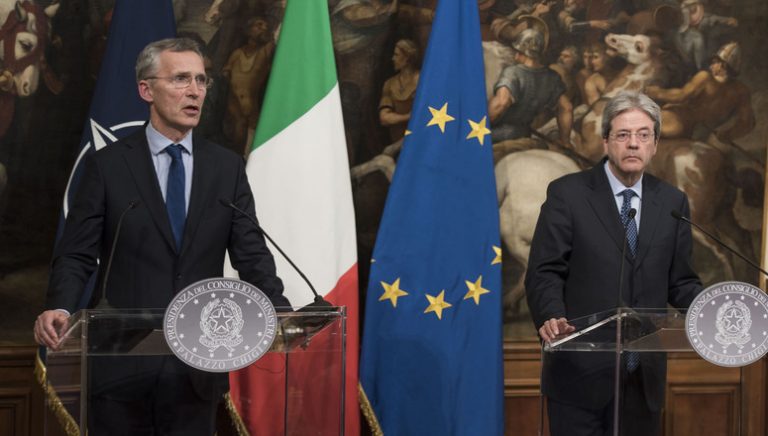 NATO is to send a team to Libya to help re-build state institutions, according to Jens Stoltenberg, the organisation’s Secretary-General.

He made announcement at a press conference following talks in Rome this week between himself and Italian premier Paulo Gentiloni.

The support aims at the creation of a modern ministry of defence, a joint chief of staff organisation and intelligence services. These were described by the Secretary-General as “crucial” to stabilising Libya.

The discussions between the NATO team and Libya side would take place in the “coming weeks”, Stoltenberg said. It is thought that they will happen within the next three weeks. On 20 April, Stoltenberg had a length phone conversation with Presidency Council (PC) head Faiez Serraj on military and security cooperation and according to a PC statement it was agreed that the talks would take place before the upcoming NATO summit. It takes place in Brussels on 25 May.

In February, following a NATO summit in Warsaw, Serraj formally requested NATO to help build up Libya’s security and defence systems, to which Stoltenberg agreed.

In his talks with Gentiloni, the Secretary-General also lauded the efforts of Italy in taking positive steps to alleviating the Libyan crisis.

“Italy is once again being a highly valued ally because you are really present, you are really helping to solve the crisis, the problems in Libya through the political process, but also through your presence in Libya,” he told the Italian premier.

“We all are grateful for what you do there,” the NATO Secretary-General added.

It ties in with a similar statement Serraj made on Thursday in a phone conversation with Italian foreign minister Angelino Alfano when he said he was convinced of the importance of Italy’s role in finding a political resolution to the Libyan crisis.