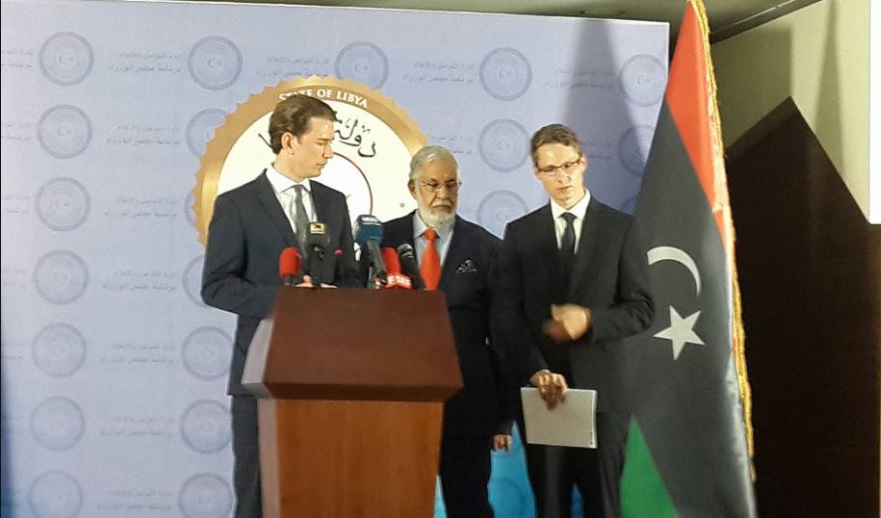 The Foreign Minister of the Libyan UN-proposed government, Moahmmed Sayala said Monday that Austria is soon to reopen its embassy in Tripoli and resume flights to Libya.

Sayala held Monday a joint presser with his Austrian counterpart, Sebastian Kurz, who described his meeting with Fayez Al-Sirraj – the Head of the Presidential Council – as fruitful and in line with establishing firm relations, speaking out his country’s support for stability in Libya on all levels.

“We would also be glad to cooperate with Libya in fighting illegal immigration in coordination with the EU operations.” Kurz indicated.

Sayala, on the other hand, said they discussed illegal immigration and monitoring of Libya’s southern borders as well as the efforts to persuade neighboring countries to secure their borders to disallow any more influxes of illegal migrants.

They also said that they discussed reactivating the trade and economic cooperation agreements that were signed by the two countries.

“The Austrian FM was accompanied by a delegation of huge companies; representatives from Austria in fields like oil, health and food industry.” Sayala remarked.

Answering a question about whether or not Libya wants weapons from the international community to fight illegal immigration, Sayala said that Libya doesn’t want to open fire on immigrants, adding that Libya is under an embargo of weapons purchase.

“All we asked for from the international community is surveillance airplanes to monitor Libya’s skies and the southern borders with a distance of 4000 km so that we can stem the gush of illegal migrants.” Sayala explained.

He also reassured the international community that the intercepted migrants by the Libyan coastguards are being sheltered in Libyan migration centers till they get repatriated to their countries of origin via their embassies in Libya.