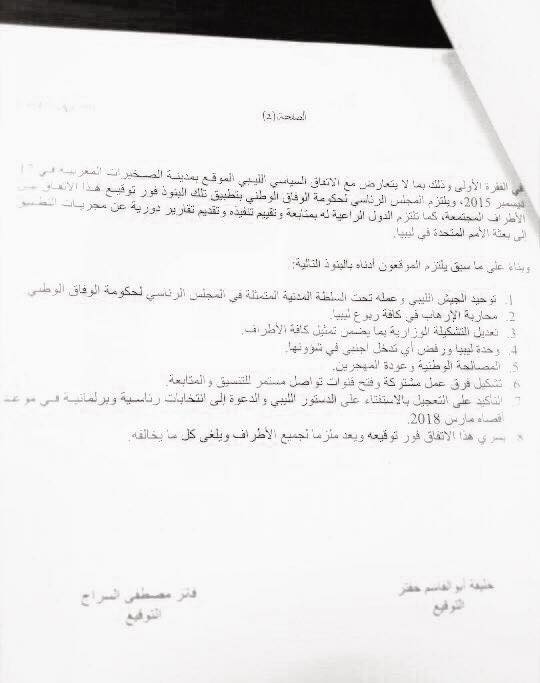 A leaked document said to be of an agreement between Khalifa Haftar, leader of Dignity Operation, and Fayez Al-Sirraj, the Head of the Presidential Council of the UN-proposed government, was circulated on local Libyan media outlets.

The agreement has been the byproduct of the meeting sponsored by the UAE under the auspices of the international community.

The agreement includes uniting Libya’s military factions under the command of the Presidential Council.

The agreement also abides by the ABC’S of the Skhirat-signed agreement.

“Fighting terrorism in all of its forms across Libya and reshuffling the ministerial cabinet of the UN-proposed government to include all parties.” The leaked agreement says.

It also adds that a comprehensive national reconciliation must take place and the IDPs must return to their houses.

There should be a swift action in regards to polling the Libyan constitution and then authorities should call for presidential and legislative elections in March 2018 at most, the agreement says.

“This agreement will be in effect as soon as it is signed by Al-Sirraj and Haftar.” The leaked agreement indicates.

The agreement leaves the door wide open for surmising as to what the definition of terrorism is, knowing that Haftar calls all of his opponents terrorists, including forces of the UN-proposed government’s defense ministry.

The leaked paper did not obviously include anything regarding the fate of the article No.8 that has been a no-go for the pro-Haftar political stakeholders and whether or not the Benghazi IDPs are included under the article that says all the IDPs must return to their houses in Libya, or it just simply considers them terrorists according to Haftar’s vision.

With confirmations from different media outlets that the agreement will be announced by a joint statement soon, these speculations will all then be verified and the truths to the deal that was manufactured in the UAE will gradually unfold in the coming hours.