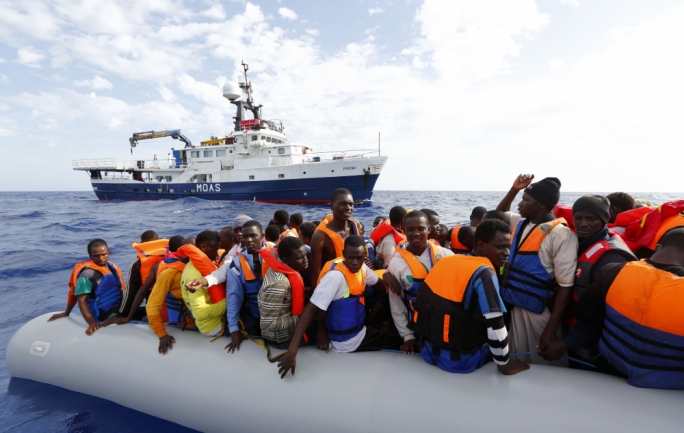 Migrant rescue boat NGOs have denied claims by an Italian prosecutor that they are in collusion with Libyan human traffickers.

The NGOs – including Malta-based MOAS and Médècins Sans Frontieres – have rejected the accusations, saying their only objective is to save lives.

“We have evidence that there are direct contacts between certain NGOs and people traffickers in Libya,” Carmelo Zuccaro told Italian newspaper La Stampa last week.

“We do not yet know if and how we could use this evidence in court, but we are quite certain about what we say; telephone calls from Libya to certain NGOs, lamps that illuminate the route to these organisations’ boats, boats that suddenly turn off their transponders, are ascertained facts,” he said.

However, Malta-based search-and-rescue charity MOAS categorically denied these claims and said that all operations are coordinated by Italian authorities.

Asked whether MOAS receives direct calls from asylum seekers or human traffickers, a spokesperson said “No. Whenever we receive SOS messages they are immediately passed on to MRCC Rome to be verified and coordinated at that level.”

On Friday, Italian justice minister Andrea Orlando said it was a lie to paint charities saving lives at sea as criminals.

“If the prosecutor has evidence, which I think he will present in coming days, then we can consider it. In general, it’s not right to make the story of the NGOs working in the Mediterranean as a tale of collusion with people smugglers because it’s a lie,” he said.

Zuccaro is a member of a group of Italian prosecutors investigating the trafficking and exploitation of migrants. He told Italy’s parliament that he was sure traffickers were in contact with rescuers, but didn’t have proof. However he did threaten to confiscate the rescue vessels if he finds just cause.

“I am convinced that it is not always the operational centre that calls on the NGOs,” he told a parliamentary committee in Rome last week.

“We also need to investigate the evolution of the phenomenon and find out why there has been such a noted proliferation of these ships and how they deal with such high operational costs without having a return in terms of economic profit.”

The chief prosecutor of the Sicilian port city of Catania, did not say he would open a criminal investigation, and he gave no details about the evidence.

“We don’t know if we can use this information in a trial,” he said.

MOAS skirted questions on the motivations of the prosecutor’s claims, which were pounced upon by the populist and anti-establishment party Five Star Movement (M5S) who accused NGOs of being a “taxi of the Mediterranean.”

Italy is due to hold a general election and most polls show the M5S has a narrow lead on the ruling centre-left Democratic Party. EU border agency Frontex has also criticised NGOs, saying they make it too easy for smugglers to send people to sea on rubber dinghies and old fishing vessels.

But other NGOs were less diplomatic with German NGO Jugend Rettet saying the move could be an attempt to criminalise rescuers and move them away from the operational zones.

SOS Mediterranee and Medecins Sans Frontieres (MSF) did not mince their words when they said that “the EU’s failure to reduce the number of deaths in the Mediterranean has forced humanitarian organisations to step up and take on search and rescue activities to prevent further loss of life at sea.”

They also insisted that all activities are carried out under the coordination of the Maritime Rescue Coordination Centre (MRCC) in Rome.

Speaking to MaltaToday, a MOAS spokesperson said the NGO was established and continues to function within the framework of International Maritime Law and UNCLOS “and we collaborate at sea with both state and non-state actors under the coordination of the Maritime Rescue Coordination Centre in Rome.”

Asked whether EU countries are doing enough to save lives at sea, MOAS said “the civil society response in the Mediterranean sea was borne out of a gap in the institutional response to the migration phenomenon. MOAS continues to call on European governments to act so that desperate individuals do not die; not in Libya, nor in the Mediterranean Sea.”

“We have also been campaigning for the creation of safe and legal routes as an alternative to the deadly sea crossing.”

NGOs are often blamed for facilitating the arrival of asylum seekers but according to Philipp Frisch, head of MSF’s advocacy unit in Berlin, such arguments are warped.

“To say that we, through our presence with our ships, lead to more people coming through this dangerous route, and to go to the extent that we impede the fight against human traffickers or contribute to the business model of smugglers: all these accusations are not only wrong. They also bypass the actual issue: that humanitarian rescuers are present in the Mediterranean Sea exclusively to save lives,” he said.

Zuccaro also called into question the funding of the NGOs involved in rescue missions, which also include German NGOs Sea Watch and Sea Eye, Spain’s Proactiva Open Arms, and other non-profit groups like Save the Children.

“Last summer, we saw something we’d never seen before. At times, there were 13 boats operated by NGOs working at once. Do these NGOs all have the same motivations? And who is financing them?” he asked. Small NGOs seemed to have sophisticated hardware, such as drones, to run their operations. “That’s expensive, and we’re just looking into who is financing them and why,” he said.

Most NGOs depend on donations and MOAS – founded in 2014 by American millionaire Christopher Catambrone and his Italian wife Regina – denies allegations of wrongdoing insisting that it depends on donations to fund it’s €400,000 a year operational budge.

Frontex, the European Union’s border agency, which supports the Italian authorities in rescue missions, limits its patrols to just 30 miles off Italy’s coast, which was about 130 miles from Libya – at least a 12-hour sail.

Frontex deliberately does not patrol the area where most of the shipwrecks occur and according to an internal letter published by online magazine The Intercept, Frontex’s director of operations privately told Italian authorities that his ships should not be called on to immediately respond to distress calls from outside their 30-mile patrol area.

“Frontex is concerned about the engagement of Frontex deployed assets in the activities happening significantly outside the operational area,” Frontex’s director, Klaus Roesler, wrote to the head of Italy’s Immigration and Border Police, Giovanni Pinto, on 25 November, 2014.

The letter has been referenced in Italian newspapers and released with redactions that covered detailed descriptions of how Frontex coordinated its assistance with rescue efforts.

In recent years, Italy has become the main route for people seeking to reach Europe, with 181,000 arrivals last year alone and some 4,600 estimated deaths at sea.

So far this year arrivals are up more than 40% on 2016, and as many as 1,000 have died, according to the International Organisation for Migration.