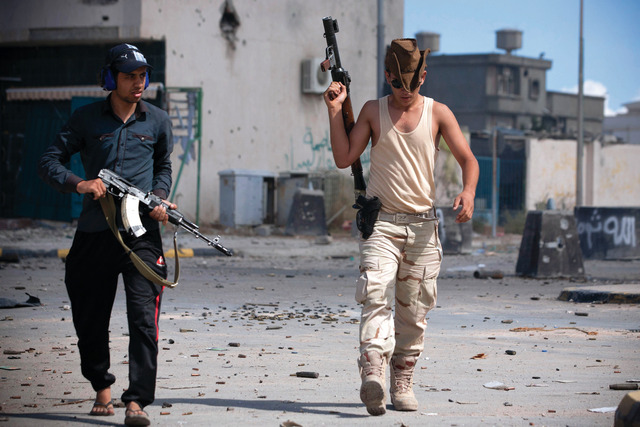 Sebha is tense today after gangland fighting yesterday supposedly between members of the Awlad Sulaiman and Mahamid tribes left a number of them dead. Estimates vary between six and 15 dead, however, the mayor of Sebha, Rafeh Hamed, has said that officials are not “not yet sure” about the exactly number. For its part, Sebha Medical Centre reports receiving six bodies yesterday.

The wounded are put at 12.  The medical centre says that it had received none so far but feared that no injured had come because they feared they would be targeted even in the hospital if they went there.

The trouble started when a gang of Mahamid armed men tried to steal a car belonging to a member of the Awlad Sulaiman tribe, Yahia Aswaidat Al-Sulaimani, while he was heading to the Fajr (dawn) prayers. He resisted and was shot dead.

Members of the Awlad Sulaiman, intent on revenge, then went to the area in the town known as Camp 80, near the Manshia neighbourhood and attacked members of the Mahamid tribe based.

Clashes are reportedly still ongoing despite attempts by elders from other tribes to mediate a peace. Mayor Hamed has effectively confirmed this, saying that the situation was still “not resolved”. Latest reports say that two more people died in fighting today

However, he also said that the clashes had nothing to do with the two tribes, that those involved were simply gangland criminals and most of them from other countries Libya. Only two of the dead were known to be Libyans, he claimed.

The district known as Camp 80 is inhabited largely by people from Chad and Niger, but many of them were in fact originally from Libya who returned, following a call from Qaddafi, and settled in what was then a camp in 1980 ­­– thus the name. It became overcrowded, squalid and poor but was re-laid out, with new roads and buildings, in the years immediately before the revolution.