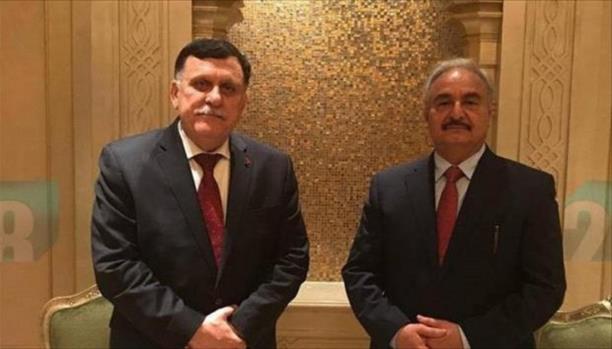 A group of hardline Misratan militias have lambasted the Khalifa Hafter-Faiez Serraj Abu Dhabi meeting, vowing to “crush” the UN-backed government as a result.

“If the world wants fair elections, it must remove the criminals,” a statement signed by some dozen militias calling themselves the Misratan Revolutionaries Operations Room in Tripoli.

The group is attached to the militants, led by Misrata military council and its head Ibrahim Ben Rajeb, who for many weeks have been trying to bring down the municipal council and who in their latest move broke into a meeting chaired by Misrata mayor Mohamed Eshtewi and forced him to sign a letter of resignation, although he later retracted this.

In their statement, the group, which does not represent mainstream forces in the city, said it would “purify” Misrata of its municipal council.

It also threatened militias in Tripoli allied to the Presidency Council, including those led by Haitham Tajouri, Hashim Bishr, and Ghneiwa.

“We are ready to clear the capital of them,” the militias declared.

In March, the mainly-Misratan forces supporting the would-be alternative “Government of National Salvation” (GNS) of Khalifa Ghwell were beaten by the local Tripolitan militias and forced out of the capital. These latter, now known as “the Quartet” (being Bishr, Ghneiwa, Tajouri and Abdul Raouf Kara), now effectively control the city along with their allies.

The Misratan statement follows a similar one from the GNS and its leader Khalifa Ghwell. It described Hafter as a “retired military citizen who does not have any political status” and Serraj as someone “who does not have a legal status”.

It also said the apparent agreements between Hafter and Serraj merely offered the military the chance to control Libya’s resources and bring “tyranny” to the country.