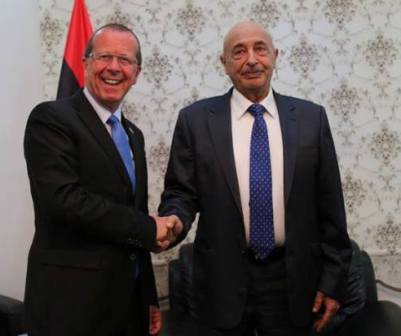 Kobler and Ageela Saleh hold latest round of talks

Fast on the heals of this week’s ice-breaking Faiez Serraj-Khalifa Hafter meeting in Abu Dhabi, UN envoy Martin Kobler had a “constructive meeting” with House of Representatives (HoR) head Ageela Saleh today in the latter’s home town of Guba, 200 kilometres west of Tobruk.

It is the fourth meeting between the two since Kobler was shunned by Ageela Saleh in January and his plane prevented from landing in Tobruk.

“Good discussion on way forward for the political processes,” Kobler tweeted after today’s meeting, indicating that outcomes of the Abu Dhabi encounter took centre stage in their meeting.

The HoR revealed little else either, other than that the two discussed the latest Libyan political developments and how to make the UN-sponsored Libya Dialogue a success.

The Guba get-together comes just two days after the UK’s foreign minister Boris Johnson visited Saleh in Tobruk for what has been described as a “fruitful” meeting.