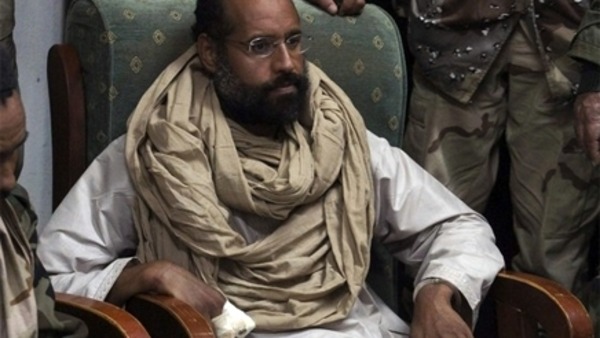 The son of the former Libyan leader Saif al-Islam Gaddafi has narrowily survived an assassination attempt by gunmen from local militias, a source from the western city of Zintan told The New Arab.

Gunmen who have demanded that the death sentence be reimposed on Gaddafi exchanged fire with prison guards after arriving at the prison.

They had allegedly come to confirm his presence of the former regime official at the detention facility after months of uncertainty about his whereabouts.

The militants withdrew after other gunmen intervened, the source said, confirming the safety of Saif al-Islam despite the clashes.

Saif al-Islam was imprisoned by Abu Bakr al-Siddiq battalion in Zintan in 2011, however his whereabouts have been unclear.

The Abu Bakr al-Siddiq battalion, loyal to renegade General Khalifa Haftar’s forces, has faced considerable internal opposition over the past months due to the unclear fate of Saif al-Islam.

In March, the battalion’s commander Ajmi al-Atiri, announced that Gaddafi’s son was released from prison and was ‘enjoying freedom’ due to an amnesty law passed by parliament.

The militia chose not to surrender Gaddafi to the International Criminal Court [ICC], where he is wanted for crimes against humanity.

“We are not concerned with the international tribunal as the ICC did not ask us to hand him over,” al-Atiri told The New Arab previously.

In the same month, the battalion announced the handover of Saif al-Islam to a committee composed of the Military Council and the Social Council to oversee his imprisonment.

According to the source, armed groups with no links to Haftar’s forces opposed the presence of Gaddafi’s son in Zintan, and demanded authorities carry out the death sentence issued by a court in Tripoli years ago.

He was sentenced to death in absentia by a court in Tripoli in July 2015 for involvement in the killing of protesters during the uprising that toppled his father.