Home / Normal / There is no such thing as Haftar-led Libyan army, Libyan military ranks stressed 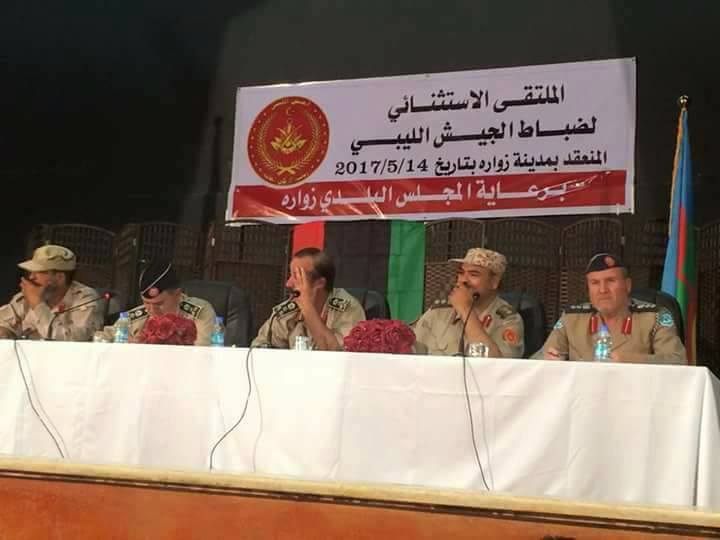 There is no such thing as Haftar-led Libyan army, Libyan military ranks stressed

Several Libyan officers from the military sector rejected in a meeting in Zuwara city on Sunday the statements of the Foreign Minister of the UN-proposed government, Mohammed Sayala, who said Haftar is the commander of the Libyan National Army.

They also called on Sayala to apologize for the Libyan people about such a statement, indicating that there is no such thing as “Haftar-led General Command.”

In a final statement that locked the meeting off, the military officers called for more support and reconstruction of the military institution as it is the cornerstone for ending the current weapons’ mess, denouncing the lack of action despite the repetitive initiatives of Tripoli General Staff officers.

“We blame the Presidential Council for the current chaos in Libya as it has ignored all proposals from the officers.” The statement reads, adding that it should take up its responsibilities toward the country and military institutions.

“Haftar’s forces are outlaws who committed crimes and violations in front of the whole world. They killed, kidnapped, burned bodies, dug up the dead out of their graves, and mutilated the corpses.” The statement remarks.

The Libyan officers also slammed Haftar’s forces as billions of miles away from the professionalism and ethics of the Libyans army.

“We will never accept, in the name of all Libyan military ranks, to work under the command of the prisoner of war Khalifa Haftar.” The officers announced.

They also said that only honorable people and professional figures will be accepted to be leaderships at the Libyan army, urging for implementing the proposal put that was put forward at the meeting requesting forming General Staff from the Libyan officers.

“We call on the PC to issue an immediate ceasefire order in eastern and southern regions and to call for the lifting of the siege on Derna civilians.” The statement says, adding that it is not like the Libyan army to besiege a city in its own country.

It added that the officers are ready to secure the whole country if the needed support for the Libyan army was provided, adding that they don’t recognize any “name” given to the Libyan army that denotes a breakaway from any Libyan component, implying the name of Haftar’s self-styled Libyan Arab Army.

Last October, the Libyan military officers held the sixth gathering for the Libyan army figures, announcing their rejection of the return of the military rule and working under their command of “the war criminal” Haftar, calling for appointing commanders for the army in no more than 30 days then.