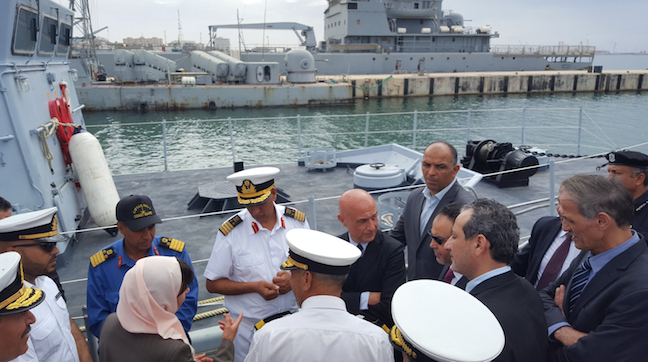 In talks with Marco Minniti largely focused on migration, Serraj insisted that Libya and Italy were “firmly on the same side” in the fight against human trafficking.

“We know perfectly well that Libya and Italy are both victims of trafficking in human beings,” Minniti said. “That is why there is a neighbourhood commitment to defeating those who have no respect for life.”

The two discussed efforts to train the Libyan coastguard and provide it with state-of-the-art equipment to bolster its efficiency and capabilities.

“We will not leave you alone,” Minniti later told members of the coastguard at a ceremony handling over four boats for coastguard use. “Libya, Italy and the EU – they all stand firmly behind you,” he declared.

At Busetta naval base, he further told those aboard the patrol boats that he was “impressed by your motivation and resolve. We trust your efforts and professionalism.”

Minniti has played a key role in efforts to strengthen the Libyan coastguard as he tries to stem the tide of migrants entering Italy.

Last month, it was he who handed over of the over the first two of ten boats to Libya, intended to help the coastguard. These featured, plus two more, in today’s ceremony.

“They are Libyan vessels operating with Libyan personnel trained in Italy,” he declared at the ceremony.

“These are capable officers who from now on will be able to contribute to a twofold operation – firstly to control Libyan territorial waters, which is very important for the stability of this country. The second is to contribute, together with other countries in Europe, including Italy, to the security of the Central Mediterranean, able to intervene against human traffickers and take preventative action against terrorism.”

In the next few weeks, he added, the coastguard training would be complete and six more boats would be delivered.

It would make the Libyan coastguard “one of the most important in Africa”.

Coordination between the Libyan and Italian coastguards continue to grow. Four days ago, Libyan coastguard and border guard capacity building was again the major focus at a meeting of the two country’s Joint Committee on Combating Illegal Immigration.

Separately, the EU’s foreign policy chief, Federica Mogherini said she supported German and Italian proposals to step up their efforts to protect the southern Libya. Greater work needed to be done in the desert region to control migrant flows.

She was speaking at an EU Foreign Ministers Council meeting in Brussels today.