Home / Normal / Was HoR Speaker kicked out or he withdrew from Haftar’s ceremony, eastern region ponders 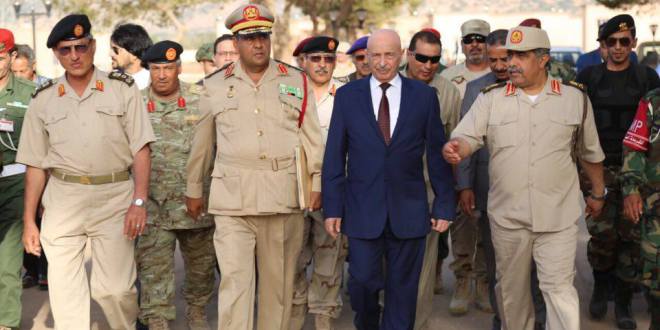 Was HoR Speaker kicked out or he withdrew from Haftar’s ceremony, eastern region ponders

The inexplicable absence of the House of Representatives’ Speaker, Aqilah Saleh, from the fancy ceremony of Khalifa Haftar on Tuesday to celebrate the commencement of a new patch from eastern government’s military academy, raised many eyebrows and urged many questions, especially that Saleh arrived in Tocra, the ceremony’s spot, on last Monday.

The HoR’s website posted a video and photos showing the arrival of Saleh to the military academy location and he was received by the Chief of Staff of Haftar’s forces, Abdelraziq Al-Nathori.

The HoR Speaker was shown as touring the academy before the commencement ceremony took place.

Once the ceremony was on, Saleh was not there in the honorary seats next to Haftar and others, which left many activists and people questioning the strange absence.

To justify his absence, sources close to Saleh said that some bodyguards from his side had a bit of tension with those of Haftar, who are supervising the ceremony, that is why he had to leave to avoid further complications.

The tension started when Haftar’s bodyguards disallowed Saleh to enter the ceremony as he arrived late, the sources added, saying Saleh chose to alleviate the tension and just left.

“He did not want any fight or improper behavior to take place.” The sources added, saying that Abidat tribesmen were so ticked off by the absence of Saleh and took it as an insult to their tribe.

Some different sources said that one of Haftar’s sons was responsible for kicking out Saleh as he came late, saying that he thought Saleh was deliberately trying to steal attention and camera zooms from his father by entering the ceremony late.

Whether he was kicked out or he withdrew himself from the ceremony does not really matter as much as the absence of his title “Chief Commander of the Army” matters to the graduation of a new military patch, thus leaving the professionalism of the institution at stake.