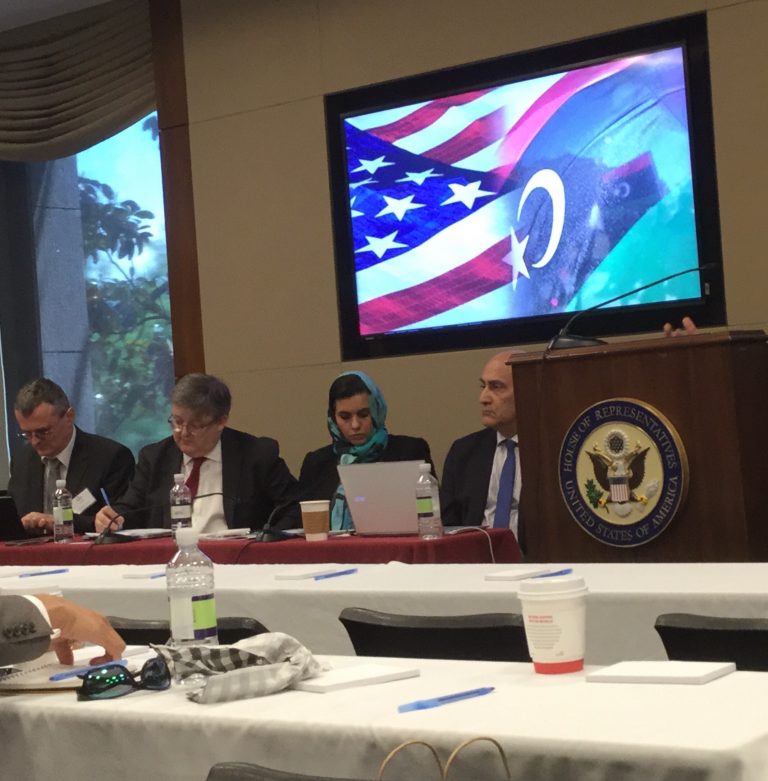 Given how Dr Shennib’s opening statement called for a new level of thinking, it may have surprised some when he raised a timely and contentious issue, Libya’s path to a viable constitution, and posited what might be considered revisionist thinking by some: a return to the Constitution of 1963.

The constitution was not part of the conference’s formal agenda but was broached during the Q&A after the panel on “Security and Stability in Libya and the Region”. Reminding the audience of the stalled process that has plagued the Constitutional Drafting Assembly (CDA) for the last three years, Shennib questioned if the extreme positions of factions within the CDA were reconcilable and, if consensus was reached within the CDA, how well the resultant draft would be received in a referendum. Given the contentious response to the most recent draft by a number of constituencies, Shennib’s skepticism was justified.

Walid Phares, a Lebanese-American political consultant on MENA affairs and global terrorism and former campaign advisor to President Donald Trump, compared the constitution structurally to the roof of a building and suggested Libyans had yet to construct the lower floors. He recommended first reaching consensus with the actors in control on the ground, and then, “under the protection of this consensus, civil society could begin to push for a constitution and reforms,” something in which the international community should not meddle. At the same time, he took the view that the US should do more to support Libyan state building, including appointing envoys to the region and facilitating additional conferences towards improving the United States government’s and public’s understanding of the Libyan situation.

The other American on the panel, Bill Lawrence, a professor of political science and international affairs at George Washington University formerly with Control Risks, the Center for the Study of Islam and Democracy, the International Crisis Group, and the United States State Department, recalled how in 2005 the international coalition known as the Friends of Libya explored the 1963 Constitution and agreed that textually it would not require much modification. Although Lawrence described it as doable, he saw the monarchical vision as a stumbling block, stating “of course, there is a constituency that wants the monarchy to come back, most don’t.” He concluded it is more likely that a new constitution, which walks back some of the more extremist positions in the current draft, due to the absence of groups that have not been properly represented in the Beida process, would be more representative of Libyan society. Lawrence recommended achieving a 90-percent consensus and looking to the Tunisian process under Ghannouchi as an example.

In contrast, Colonel Wolfgang Pusztai, Austria’s former defence attaché to Italy, Greece, Tunisia and Libya, was less dismissive. He viewed amending the 1963 Constitution as a viable interim measure, recommending adoption for about five years to provide a ground to allow the country to stabilise, with refinements implemented after stabilisation. Raising another central issue that was not addressed in the conference agenda, Pusztai advocated for a constitutional amendment that would address how Libyans share oil income, rightly pointing out that a formula for this would “remove a lot of emotion” from the discussion.

It bears mentioning that a separate initiative known as the Libyan Economic Agreement (LEA), developed by Ahmed Jehani, the former Minister of Rehabilitation and Reconstruction and Chairman of the Stabilization Team during the 2011 revolution, and a team of Libyans outlines a national income sharing plan. According to the LEA, 20 percent of sovereign income would be allocated to the national government, 40 percent of national income to local government to fund local municipalities, and 40 percent to Libyan families.

On the sidelines of the conference in a deeper conversation, Shennib followed up on Pustzai’s argument, explaining how in Chapter V of the 1963 Constitution, Articles 46-54 define the procedures to be followed in the event that the king dies and heirs are incapable of ascending or there is an event of force majeure. These procedures authorise the parliament to appoint a replacement and the executive cabinet to name a trustee or executive council to take on the responsibilities of the king until the country until conditions improve. Shennib reasoned that all amendments to the 1963 Constitution can be nullified and a trustee/executive council can be appointed for about five years and thereafter propose revisions and a referendum.

Libyan activist and author of United States Institute of Peace publication Libya’s Religious Sector and Peacebuilding Efforts, Zahra’ Langhi, was the strongest proponent of not only reviving the independence constitution, but also of bringing back a constitutional monarchy. Disagreeing with Phares, she saw the constitution of 1951 and the institutions it created as the “arch median point” that would both stabilise and provide a common narrative to a divided country. She advocated strongly for the federalist and decentralised government provided by the 1951 constitution, viewing them as key towards Libya’s stabilisation. Langhi also espoused the monarchical vision earlier rejected by Lawrence; calling for a leadership figure who “does not belong to a particular tribe and who would unify Libya,” she argued that having a vision for the country is necessary before embarking on state-building.

When Phares questioned how it is possible to have a constitutional debate given the situation on the ground, using the metaphor of being “between a tank on one side and an RPG on the other,” Langhi pointed out that this condition applies to any power-sharing agreement, reminding us that militias in Tripoli were that day challenging the United Nations-installed government.

Had a panel been devoted to a path to a viable constitution, the discussion would have been less broad-brushed and have addressed how the most recent draft released by the CDA was received by a number of factions within Libyan society and how the Constitution of 1951/63 might be received.

Two days after the NCUSLR conference, the Libya Herald reported on protests in Benghazi and Tobruk rejecting the CDA’s draft on grounds that it did not include federalism and calling for the reintroduction of the Constitution of 1951. The draft was also rejected by the Amazigh who boycotted the CDA elections and, for the most part, the drafting process. Non-profit organisation Lawyers for Justice in Libya released a statement listing its numerous concerns regarding the draft’s failure to adequately protect human and civil rights, including freedom of expression and right to public assembly. The LFJL also objected to the draft’s discriminatory impact on “access to high public office due to requirements that both of a candidate’s parents are Libyan, and that the candidate is not married to a foreign person and does not hold a second nationality.”

Additionally under the draft, religious minorities will be unable to hold any high public office in Libya due to requirements that members of the House of Representatives, Senate and President be Muslim, and in some cases born to Muslim parents. Members of civil society echoed LFJL objections, claiming that Libyan youth were being marginalised once again. Furious that the draft excluded youth from running for office by imposing age requirements whereby a candidate must be 25 to hold office in the House of Representatives and 40 in the Senate, the Prime Minister must be 35, and the President 40, civil society organizations organised against it. Libyans now live in a global age and the election of Emanuel Macron at 39 years old as president of France heightened their indignation and potentially bolstered their case.

Similar issues would likely emerge should the Constitution of 1951/63 be revived without amendment. The federalist movement would demand annulment of the 1963 amendments that changed the federal structure to a unified, centralised government. The Amazigh would find language about the Arab homeland objectionable and oppose Arabic as the sole official language. While there are fewer discriminatory clauses based on religion, the LFJL would undoubtedly object to some of the vaguely-worded articles on human and civil rights and potential restrictions by law.

The unfortunate truth is that the youth would not fare much better. While the voting age of the draft constitution is 18, it is 21 in the 1951/63 Constitution. Members of the House of Representatives must be 30 years of age, Senate members must be 40 and are appointed by the king (or trustee/executive council) as opposed to being elected. Significantly, Libyans look forward to directly electing a President and the 1951/63 does not include this office. Libyan citizens can derive nationality from either parent, but must have been living in Libya for at least ten years and not hold a second nationality. This could prove problematic for the many Libyans who have been living in exile since 1969, including the Senussi heirs to the throne.

It seems a foregone conclusion that neither the recent draft nor the constitution of 1951/63 are likely to garner the 90-percent consensus Lawrence recommended without further refinement. It is essential that refinements to any possible constitution involve the broadest participatory, representative base possible and take into consideration that a) 65 percentof the Libyan population is aged 15-54 and b) at least one-sixth of the 6.5 million Libyans are currently living in the diaspora and would not be able to satisfy residency requirements to run for office.

In other words, as Shennib suggested, a constitution that responds to a youthful, far flung, and evolving population requires another level of thinking.