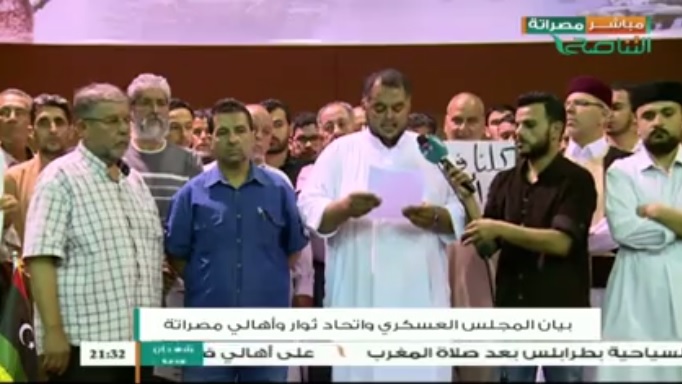 The Military Council of Misrata and the Misrata Revolutionaries Union have disowned the UN-proposed government and its Presidential Council, slamming them as illegitimate, treacherous, and foreign-agenda-oriented.

In a televised statement aired on Tanasuh TV on Sunday, both Misratan parties said that the only legitimate political entity in Libya is the General National Congress (GNC) and its Salvation Government (SG).

“We do not recognize the Government of National Accord. It is the main reason behind the current economic and political as well as security crises in Libya.” The statement says, adding that Al-Sirraj government is responsible for all the killings and atrocities that are taking place in Libya, especially in Benghazi and Derna.

The statement also bitterly denounced the Brak Al-Shati statements made by the Political Bloc of Misrata HoR MPs, Misrata Municipality, and Justice and Construction Party.

“We hail the achievements of Brigade 13 forces and the backup forces at Brak Al-Shati military operation, which got in the way of Khalifa Haftar and Dignity Operation forces’ evil intentions for the southern region.” The statement adds.

They also called for providing support for the Misrata revolutionaries, Brigade 13 and the backup forces, as well as Derna revolutionaries to allow them to continue in the right path until they topple over “the wrong and evil advocates” according to the statement.