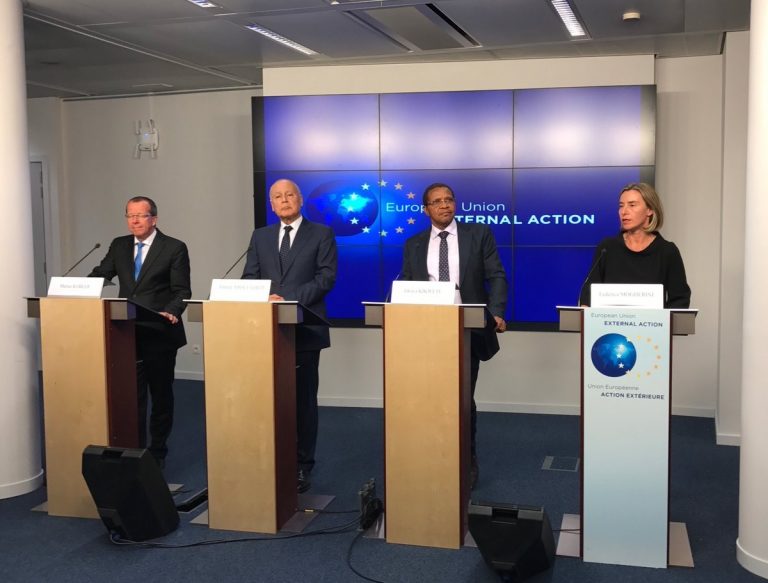 At its second meeting, held today in Brussels, the Libya Quartet – the UN, African Union (AU), Arab League and the EU – agreed that there could be “a limited set of amendments” to the Libya Political Agreement (LA). These should be facilitated by UNSMIL but Libya-led.

However, the LPA remained the sole basis for an acceptable settlement. All legitimacy exercised by the Libyan authorities stemmed from it, insisted EU foreign policy chief Federica Mogherini at a press conference afterwards, including that of the House of Representatives (HoR).

Her statement was the most categorical declaration to date that the HoR’s elected mandate had expired and its continued existence came solely from the LPA as approved by the UN.

Hosted by Mogherini, the Brussels meeting drew together the UN and AU special envoys Martin Kobler and Jakaya Kikwete and the Secretary General of the Arab League of Arab States, Ahmed Aboul Gheit.

In a 15-point statement, the Quartet said that the aim of the meeting had been to assess developments in Libya since their first meeting in Cairo on 18 March, and coordinate action.

There was nothing unexpected in the statement.

It renewed calls for an end to contacts with parallel institutions outside the LPA, rejected the use of armed force by any Libyan group or any foreign military intervention in the country, expressed its concern about recent violence and threats of violence in Tripoli, welcomed the return of calm in the oil crescent, and called on the Presidency Council (PC) to address security issues in the capital and elsewhere.

It also condemned last week’s attack on Brak Al-Shatti, saying that the perpetrators had to be held fully accountable.

Ignoring the damage that the attack had done to dialogue in Libya, the quartet went on to welcome recent meetings between Presidency Council head Faiez Serraj and Field Marshal Khalifa Haftar in Abu Dhabi and between the presidents of the House of Representatives and the State Council in Rome on 21st April. It also welcomed the appointment of dialogue committees by both the HoR and the State Council.

Expressing appreciation for the work of the Constitution Drafting Assembly, it called for the entire process to be finished as soon as possible so that general and presidential elections could take place.

It was not all enthusiastic optimism, though. The four also expressed concern about the economic situation in Libya. The Libyan authorities had to deal with the financial problems facing the country.

The Algerian minister for Maghreb African and Arab Affairs Abdelkader Messahel joined in talks with Kobler and the others on the sidelines of the meeting. This resulted in a statement from Messahel that there was a convergence of views on Libya between Algeria and the EU on the political process in Libya.